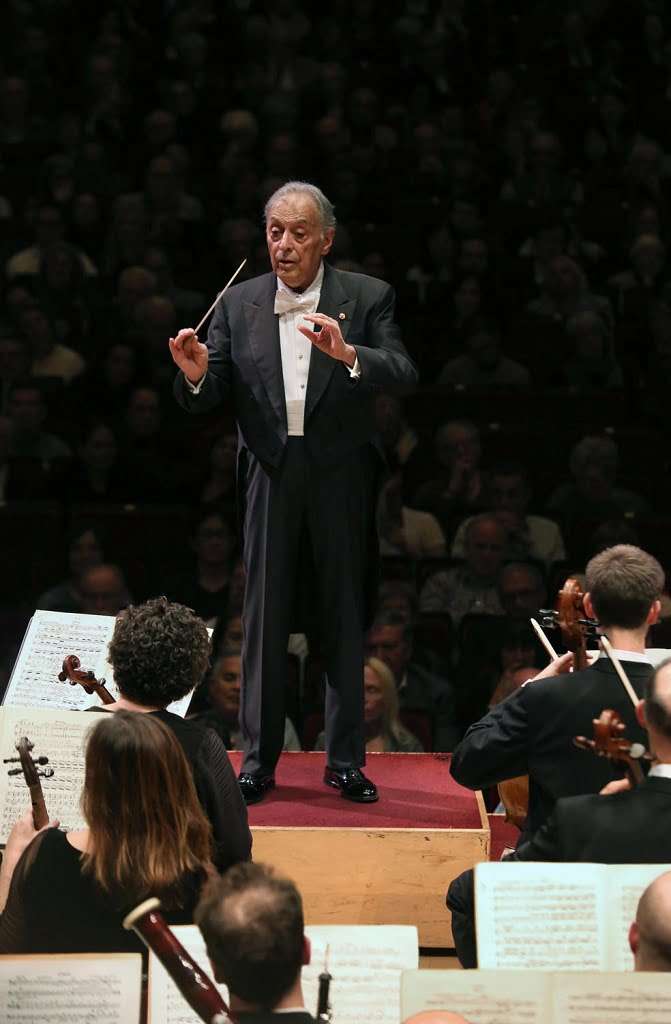 This was the first of three Carnegie Hall concerts by the Israel Philharmonic and the long-serving Zubin Mehta (now eighty-one, and following more than fifty years associated with this Orchestra, he steps down with effect from October 2019). As a former music director of the New York Philharmonic Mehta was warmly welcomed back here. He is a stately figure on the podium, drawing superb playing with incisive and precise gestures.

The concert opened with music from Amit Poznansky’s score for the 2011 film Footnote. Beginning and ending with a brief phrase on piano, it bounces material back and forth within the large orchestra. Waltz and other dance rhythms predominate, including clarinet and trumpet solos that have the flavor of wedding music. Although Poznansky creates many interesting sounds, he most often jumps from one episode to the next at so rapid a pace that none of them has a chance to develop. Mehta directed traffic adroitly, allowing the players to shine.

In the lengthy introduction to Beethoven’s Third Piano Concerto, well-paced by Mehta, dark textures were produced. Yefim Bronfman was terrific, shaping material with careful phrasing and varied dynamics, and brilliantly dashing off pyrotechnic figurations. The strings were marvelous and the woodwinds characteristic, with Daniel Mazaki’s bassoon solos standing out notably, as Mehta, ever the perfect partner, kept all in fine balance. Bronfman excelled in the cadenza – with virtuosity, lyricism and explosive power. In the Largo, one of Beethoven’s most beautiful slow movements, Bronfman’s heartfelt expression was matched by the delicacy of the accompaniment, with Yossi Arnheim’s flute and Mazaki’s bassoon in tender dialogue with the piano’s arpeggios, and Bronfman did not hesitate before plunging into the spirited Finale, during which the strings showed off their virtuosity. As an encore, Bronfman offered a dreamy ‘Clair de lune’ from Debussy’s Suite bergamasque.

Following intermission, Mehta led a wonderful reading of Richard Strauss’s Ein Heldenleben, a quasi-autobiographical tone poem that depicts a Hero (the composer himself, if with many years of creativity to come) who, supported by his companion (Strauss’s wife, Pauline), battles and triumphs over his critics, and whose great works pave the way for a fulfilled retirement.

Mehta began with an expansive account of the pulsating opening to introduce the Hero. Woodwinds were brilliant as the Hero’s carping critics, and David Radzynski was superb in the solos that paint a vivid, coquettish portrait of the wife, his violin resonant and expressive. Off-stage trumpets launch the ‘Battle’ that soon escalates to an overpowering dimension as brass and percussion, here rocking the Stern Auditorium. The struggle won, a string of Strauss self-quotations (‘The Hero’s Works of Peace’) came across agreeably, and after a soulful string passage was interrupted by recollections of the critics and the mêlée Radzynski’s violin and James Madison Cox’s horn portrayed the Hero’s escape from the World. As an encore, Mehta led the Overture to Mozart’s Le nozze di Figaro.