It was disappointing to note a half-full Wigmore Hall for John Harle and Steve Lodder’s well-planned and executed BBC Radio 3 Lunchtime Concert, covering some four-hundred years of music in the course of an hour.

The oldest music could be found in the two lute songs of John Dowland, arranged for soprano saxophone by Harle. These took on an oboe-like sonority and, in the case of “Flow My Teares”, a plaintive melodic line. “What if I never speede” countered this with a brighter sound.

Harle was in good humour in the opening unaccredited arrangements of Bartók’s folksongs, and in particular the third, where Lodder’s enjoyably po-faced march accompanied a chirpy melodic line.

After this the legend of Pan and Syrinx was cleverly united, the former represented by Britten’s powerful solo, originally for oboe. With Lodder depressing the piano’s sustaining pedal, Harle’s solo really sang, the shrill lines echoing for seconds after in a startlingly effective rendition. Having switched to an alto instrument he gave a tender reading of Syrinx (which Debussy scored for flute), notable for its rhythmic flexibility. 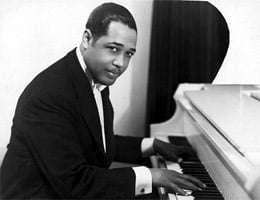 Three settings of Duke Ellington ballads followed, moving in their relative simplicity but allowing for subtle improvisation. In Sultry Sunset Harle’s second melodic ascent was an echo of the first, as if the sun had already gone down, while the mellow tone of Star-Crossed Lovers, from the Such Sweet Thunder suite, was beautifully maintained by the saxophonist. Throughout it was interesting to note the harmonic influence of Ravel, found in the clarity of Lodder’s accompaniment.

Harle turned composer for the piano miniatures making up Three Secrets of the Abyss, themselves part of a larger, multi-composer album recorded for Sony BMG entitled “The Quiet Room”. Designed to take the listener away from the trappings of modern life, they found themselves ironically available as ringtones! Harle’s restful trio betrayed the influence of the Satie Gymnopédies, and Lodder’s softly toned performance found their essence.

Phil Woods’s sonata, in contrast, threw caution to the wind, the alto saxophone rising to a raucous high F at the end of the first movement, then taking off in a tour de force finale that shrieked and hammered in response to strongly syncopated melodies. Lodder’s tapping left-foot itself became a percussion instrument as the finale combined jazz improvisation and classically-influenced dialogue, with a preceding Moderato of concentrated thought.

Proof positive, then, that the two styles can mix – and as if to recognise Ravel’s influential voice, the pair gave an affectionate encore of his Pièce en forme d’Habanéra.