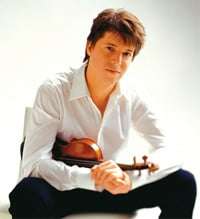 Joshua Bell is a Wigmore Hall regular and it was standing room only for this recital. His performing style is restrained and, unfortunately, he comes from that generation of string players who use detached bowing, which means that he plays every note as a separate entity and a seamless legato becomes almost impossible.

The programme opened with Mozart’s B flat Sonata. An insubstantial work, Bell’s intonation was far from immaculate in the opening movement, although the swift tempo paid dividends in helping to disguise the music’s lack of inspiration. In the Andante there were carefully judged variations of tempo and dynamics, and the finale was spirited. Unfortunately Sam Haywood seemed to see himself as only an accompanist, and not an equal partner. In the Beethoven this became a real problem: Haywood was far too restrained and throughout he failed to assert himself. There was little or no tonal variety or shading – this sounded like Mozart, not Beethoven.

Bell adopted a fast tempo in the Allegro con brio, but there was no real tension and drama, and the sforzandos needed more bite and aggression. In the heavenly Adagio cantabile the tempo was reasonably slow, but the music was not felt and true serenity and beauty were only found in the exquisite pizzicatos of the final page. Even by Beethoven’s standards the scherzo is outrageously inventive and Bell imbued it with a superb sense of elfin humour, with a relaxation of tempo for the trio that made it sound disturbingly like late Schubert; and in the finale there was a real sense of dance at speed and the second subject was given a Neapolitan flavour. And yet it was all slightly too smooth, aggression and attack are both part of Beethoven’s musical language and these were largely absent.

After the interval there was another masterpiece, Ravel’s (second) Violin Sonata, which was written between 1923 and 1927, and owes a clear debt to Swing and the Blues. Here the pianist did something I have never heard before by almost completely failing to capture Ravel’s enormously distinctive tonal palette, whilst Bell seemed unable to realise the score’s sense of fantasy. This was especially apparent in the second movement, which is marked ‘Blues: moderato’, in which far more swing was needed. The finale features an endless series of semiquavers in the violin part while the piano refers back to earlier material, and here neither player realised the music’s sense of power and danger.

Tchaikovsky’s Méditation was originally to have been the Violin Concerto’s slow movement and the composer’s almost Italianate soaring morbideza was not captured. Sarasate’s short virtuoso showpiece was merely efficient and lacked real flair and devilry. There was one encore, a sweet, but totally unnecessary arrangement of Chopin’s sublime Nocturne in C sharp minor (from Opus 27).