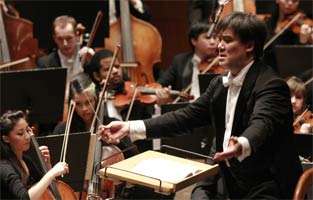 In times when many of us fear for the future of the symphony orchestra, it is heartening to experience a student ensemble that can compete with professional groups cheered on enthusiastically by an audience composed substantially of their peers. For not only did this performance prove yet again how talented the members of The Juilliard Orchestra are, it also showed that young people can relate to art music.

Ironically, Mahler’s Ninth is not a work that one would expect young people to take to heart. It views life not from its beginning, full of eagerness and promise, but from its end as vivid recollections of the past flash before the mind as one is about to give up this mortal coil. So is it possible, one may ask, for student musicians led by a relatively young conductor to communicate this farewell? Whether intentionally or not, this performance of the Ninth seemed to gloss over moments that should convey nostalgia, particularly during the first movement, concentrating instead on more powerful or contrapuntally complex passages infused with vigor and intensity that bespeak a youthful sensibility. All too often the important motto of farewell (a falling major second) seemed buried in a welter of sound or so faint as to be almost inaudible. The warm, soothing strains of the first theme seemed demolished by an extremely harsh, confrontational approach to the angular second theme. Even the important outburst of the arrhythmic motif that opens the symphony then suddenly explodes before the end of the development was undercut by an extremely loud whack on the tam-tam. Although playing was generally excellent (particularly in the strings, the violins placed antiphonally), the first-horn player seemed to have difficulty in the high range, the shadowy transitions between themes were too pale and indistinct, and the brass generally held in check. Only the light-hearted theme that quotes Johann Strauss II’s Freut des Lebens (Enjoy Life) seemed to convey a sense of endearing gentility. The melting strains of the first theme had a moderately yearning quality but quotations from “Das Lied von der Erde” were over-indulgently underlined. For the most part, energy trumped sensitivity, technical accuracy avoided nuance and the high-powered volume trounced moments of repose. 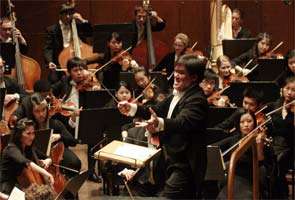 During the middle movements, which revel in contrasting dance themes (landler versus waltz in the second) and demonic angularity against angelic lyricism (in the third), Alan Gilbert propelled tempos forward, sometimes to near frenzy. Propulsive motion works well during the extended coda of the ‘Rondo-Burleske’ when the speed keeps increasing into the close. But the calmer middle section was infected by fiery spirit and thus lost touch with its function as a moment of repose. A certainly crudity in Gilbert’s treatment of the bumpkin-like landler theme that opens the second movement makes sense, but his extremely aggressive treatment of the waltz ignored what should be a more gradual development from unobtrusive light-headed frivolity to furious antagonism. What was missing was a sense of distance from which these combative dualities should be viewed; instead, Gilbert took us into the midst of the conflict, albeit enabling the players to engage their youthful energy and vitality to the utmost.

Such surging agitation spilled over into the finale. But here we have a slow movement with themes whose hymn-like quality is best captured when treated with a slightly lingering legato made more ardent by accented figures in lower strings. The importance of well-conceived string balances during the multiplex counterpoint that pervades the finale’s two principal themes cannot be overstated. Gilbert’s overemphatic accents became so extreme that it caused the respectful aspect of the prayer-like plea for resolution of worldly struggles to lose focus in intense aggressiveness and sounded ill-tempered if not angry. As the music become increasingly assertive, the lower-string figure receded into the background, sometimes lost in the welter of sound. At the climax, out of which the violins assert an elongated version of the opening arrhythmic motto and then descend into the reprise of the initial theme, Gilbert weighed heavily on each note as if trying desperately to communicate this often-missed reference. In the closing moments, the hyped-up energy level dissipated too suddenly, making the sublime repose of the ending sound completely disconnected from what had preceded it.