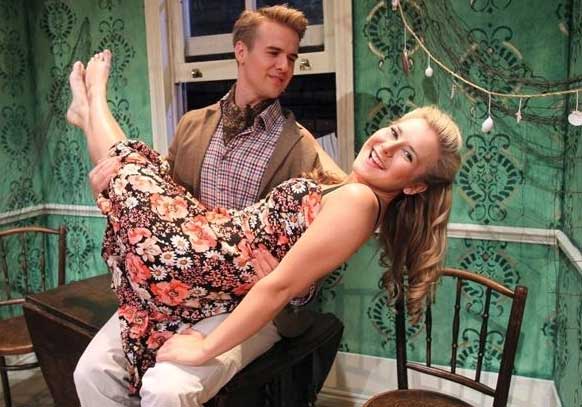 To celebrate the sixtieth anniversary of Salad Days, the Finborough Theatre is presenting another of Julian Slade & Dorothy Reynolds’s musicals, Free as Air. Although they wrote several shows, Salad Days was the only really outstanding success for the Slade-Reynolds team, running for more than five years and well over 2,000 performances, even beating Sandy Wilson’s The Boy Friend by more than 200. Salad Days was a hit because in 1954 the public was still recovering from the Second World War – remember that some food remained rationed – and it needed something purely entertaining in an age of austerity.

Salad Days provided a tasty dish of inconsequential nonsense about Tim and Jane, a couple of undergraduates looking for work. A passing tramp offers them his mobile piano to look after. But, hey, it’s a magic piano and when it plays it makes everybody dance with glee. When it vanishes, Tim’s uncle takes them in his flying saucer to look for it… How the hell did this show run for five years and encourage Cameron Mackintosh to become a theatre impresario? Salad Days has though often been revived and for the past few years has turned up as a Christmas show at London’s Riverside Studios.

Cut, then, to 1957 and Free as Air. This is a little more down to earth, although it still suffers from a surfeit of whimsicality and in London ran for a respectable 400 performances. Setting the show in the Channel Islands, Slade and Reynolds went off to do research on the island of Sark. The resulting story concerns the fictional Terhou, where Independence Day is celebrated by crowning the May Queen. However, the residents discover they have nobody to crown because all the girls have been May Queen before, and the rules state that nobody can be crowned twice. To their rescue, however, on the monthly boat that brings supplies from the mainland, comes Geraldine Melford, a recent heiress with pots of money looking for somewhere to hide from all the publicity.

She is, however, pursued by boyfriend Jack Amersham and a lady of the press, Ivy Crush. Geraldine begins to take a shine to Albert, nephew of Paul, Lord of the Manor on Terhou, while Jack is pursued by all the other girls, in particular Molly who he promises to take to London. After much toing and froing with a little too much plot about a proposed holiday-camp development spoiling the island paradise, the leading characters pair off and it’s no surprise to say that it mostly ends happily, with you-know-who being crowned May Queen in a tale that might have been told by Gilbert & Sullivan.

Slade’s music is attractive enough, if much of a muchness. He had the art of writing nice tinkling tunes that are serviceable rather than outstanding. The chorus of ‘I’m up early’ gets the show off to a rousing start, while ‘Let the grass grow’ sung by Potter, Mutch, Lord Paul and the Island Men was, apparently, the only song that had a additional life (Dickie Henderson recorded it). ‘A man from the mainland’ finds Molly expressing what she really wants out of life and she also sings a beautiful song, ‘Terhou’, that details the history of the precious island. Geraldine sings of ‘Nothing but sea and sky’, while Jack and the Jersey Island Girls have a fun number in ‘Her mummy doesn’t like me any more’, recalling Ivor Novello’s ‘And her mother came too’. For the old couple, Miss Catamole and Mr Potter, there’s the charming ‘We’re holding hands’, this after fifteen years of being engaged. Albert and Geraldine also have duets in ‘Free to sing’ and ‘I’d like to be like you’ which are delightfully romantic.

The Finborough’s tiny stage has to accommodate nearly twenty performers. Director-choreographer Stewart Nicholls has his work cut out trying to avoid the piece becoming too busy. However, the performers take it in their stride and manage to convey that they believe every silly word of it. There are some terrific performances to witness and marvellous voices to hear. Charlotte Baptie as Geraldine has a true heroine’s voice with a touch of a velvet glove; Ruth Betteridge as Molly makes a powerful contribution that could set bells ringing; Josh Little as Jack is a fine tenor with a nice line in insouciant humour; Jane Quinn as the reporter Ivy does well in ‘Daily Echo’ and ‘Holiday island’; Joanna Munro as the veteran Miss Catamole, who was crowned May Queen in 1927, brings a touch of nostalgia to ‘We’re holding hands’ with Ted Merwood as Potter; and Daniel Cane, looking not unlike Benedict Cumberbatch, evinces a fine comic spirit as Albert, the nephew of the Lord of the Manor. Richard Gibson as the latter is excellent as the rather shambolic head of the island, demonstrating his comic abilities and a fine singing voice in ‘Let the grass grow’ and ‘The boat’s in’. James Church does brilliantly as the piano accompanist.

It’s always good to catch up with rarities such as this. One can only be grateful to Neil McPherson (Finborough Theatre) for reviving these forgotten British musicals. If he didn’t, then nobody else would.