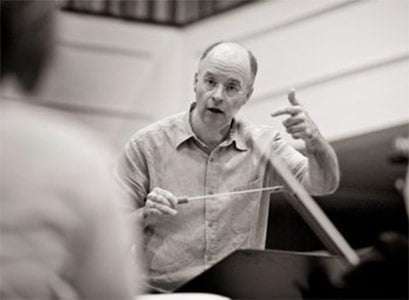 This most attractive programme, a nice mix of pieces, closed the 2013-14 Season of the Kensington Symphony Orchestra, now returning to what might be counted as its main home, St John’s in Smith Square.

With the white-jacketed and galvanising Russell Keable at the helm, Tchaikovsky’s take on Romeo and Juliet (desert-island music for your reviewer) began with pungent woodwinds – Friar Laurence dispensing his wisdom – and ominous lower strings – trouble brewing. Such expectancy was delivered fully in what followed, whether the Montagues and Capulets battling it out or the star-crossed lovers finding their moment of ecstasy, the KSO in terrific form (gutsy or swirling, the strings were particularly impressive). With Keable seeing the piece whole, this Shakespearian tragic tale was ratcheted-up with both symphonic logic and increasing excitement.

Kodály’s Dances of Galánta (1933) offered quite a contrast, a visit to the Hungarian plains, and a performance no less fine or cohesive – earthy and bucolic, swinging and scintillating, ranging from fairy-tale delicacy to passionate outburst and with something saved for the accelerations at the end. Kodály scored for a relatively small orchestra but it’s a colourful one and the lads and lasses of the KSO had a high old time. A word of praise for Ed Corn’s ripe horn solo and, especially, Chris Horril’s suave, witty and whimsical contributions on clarinet.

We don’t hear enough of (Great Dane) Carl Nielsen’s music in the concert-hall, although the forthcoming London Season brings a complete Symphony Cycle from the BBCSO and Sakari Oramo and finds the Philharmonia Orchestra and Paavo Järvi beginning one. (It’s ‘Nielsen 150’ next year.) Russell Keable has waited forty years to conduct ‘The Four Temperaments’, since discovering the work aged 16 in Carl von Garaguly’s Vox/Turnabout recording. It may not be Nielsen’s supreme achievement as a symphonist (that accolade could well be afforded to the last of them, the amazingly ingenious and enigmatic Sixth) but it’s certainly an inimitable creation (completed in 1901) in four temperamental movements – choleric, phlegmatic, melancholic and sanguine.

The first, slightly too deliberately paced, was given tutta forza – but the brass was too loud, even at the back of the auditorium. That said the reading was rich in character (essential) and caught well the music’s largesse and half-lit and mercurial contrasts, Keable’s long-term appreciation of structure then allowing for a now-quicker coda. Conversely he moved the second movement on a tad too much, something more languorous (lazier) was needed, yet caught well-enough its ‘popular song’ and reverie, suggesting a serenade by a lake, a peaceful summer’s day. Best was the heavy-hearted slow movement, grief-stricken by the close, delivered grandly yet with a beautifully judged diminuendo to close. The central pastoral section was also affectingly turned, the woodwinds shining. If initially the finale was a little tentative – more impetus and perkiness was required – by the time we reached the coda – a knight-errant returning to his castle victorious, sort of thing – a good swagger had been worked up. All in all, a splendid effort. What chance now of Saul and David?

The KSO opens its 2014-15 Season on 13 October with Rachmaninov, Debussy and Lutosławski (his Third Symphony) and continues on 25 November with a concert in memory of the Orchestra’s founder, Leslie Head, featuring music by Walton, Vaughan Williams (with John Tomlinson), Stephen Montague (a world premiere) and Sibelius. Enticing!