Carousel
A musical in two Acts with music by Richard Rodgers to book & lyrics by Oscar Hammerstein II, based on the play Liliom by Ferenc Molnár 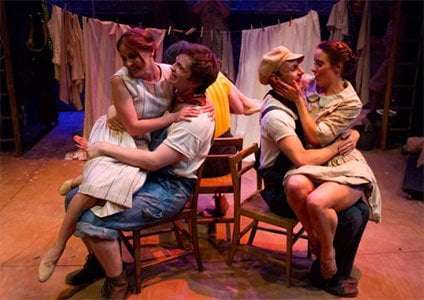 Morphic Graffiti had hits with its off-the-wall Jekyll and Hyde and The Revenge of Sherlock Holmes!, and the company’s new, pared-down production of Carousel is in the same league. Trailed as a bold reimagining of the Rodgers & Hammerstein 1945 classic, this staging’s USP is director Luke Fredericks’s coherent updating from the 1870s to Depression-era New England in 1929. The period well explains Billy’s desperation, which percolates down through sharply observed have and have-not divisions – okay for emerging go-getter Enoch Snow; less good for the carousel owner Mrs Mullin who the production makes clear has had to diversify to get by; and quiet anxiety for Aunt Nettie with her frequent recourse to her hip-flask.

In the end, though, it’s the magic realism that works so effectively here. Normally I run a mile from anything that smacks of larky funfair folk and their tricks, but Fredericks has skilfully invented on the back of Stewart Charlesworth’s great set-designs a parallel otherworld of colour and hope that sits brilliantly in the Arcola’s adaptable but small performing space.

From the moment the ‘Carousel Waltz’ gets into gear and the carousel itself mysteriously emerges out of the abstract set, I was hooked, as much by its sheer directness as by its sense of rightness, and I continued to be hooked through the famous big numbers such as ‘June is bustin’ out all over’ and a spectacularly anarchic and emetic ‘Real Nice Clambake’. 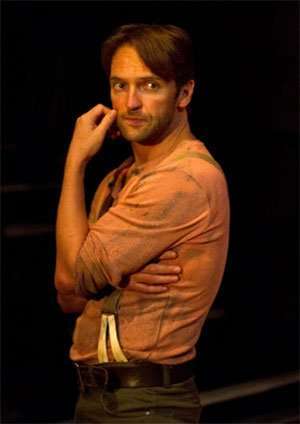 Another thing that Fredericks gets spot-on is the show’s potentially awkward shape – a 90-minute first Act, with the second barely half that, which can make the ending seem alarmingly cursory, but which is given balance and substance by Lee Proud’s fine ballet sequence of Julie and Billy’s daughter Louise dancing a bit too closely to her dead father’s tune.

But it’s the intimate scenes that really stick in the memory – the touchingly drawn Carrie-Mr Snow relationship running in tandem with Julie and Billy’s turbulent affair, and, after the devastating staging of Billy’s death, his brief, redemptive return from Heaven to Earth acquires a grandeur that made the Arcola seem vast.

Dominating the show is Tim Rogers’s magnificent, brooding Billy, a chippy, volatile outsider with a voice and stage-presence of boundless intensity – his ghostly entry into the finale’s reprise of ‘If I loved you’ was a tear-jerking masterstroke, and he had bluster and tenderness to spare in the great ‘Soliloquy’.

Gemma Sutton’s Julie matched Billy with a quiet insistence that had you straining to catch every nuance of her ‘If I loved you’ and the lovely ‘What’s the use of wond’rin’, and there was a marvellous focus to everything she did. Vicki Lee Taylor was an endearing, ditzy Carrie and her darling Mr Snow as played by Joel Montague caught the flavor of post-World War Two optimism (which, with the fast-forward through Louise’s childhood, is where the updating closes) mixed with canny opportunism. Richard Kent’s rat-like Jigger was a special pleasure; Amanda Minihin’s Nettie Fowler made her show-stopping ‘You’ll never walk alone’ profoundly introspective; and Valerie Cutko managed to be both vulnerable and predatory as Mrs Mullin.

Dancer Susie Porter was excellent as Louise, and in general the other dancers made Proud’s hormonal choreography sizzle with danger. The reduction of the score, with a central, finely played part for harp, only enhanced the beauty of Richard Rodgers’s melodies. It’s unmissable.