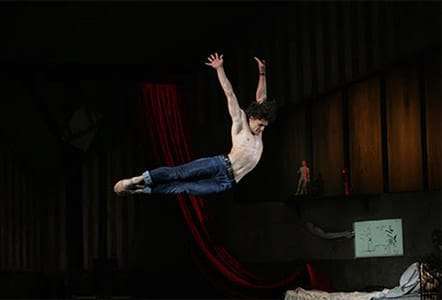 We live in the age of the male dancer. After emerging from behind his ballerina during Diaghilev’s Ballets Russes in the form of Vaslav Nijinsky, he disappeared again, and it can be argued that it was only with the defection of Rudolf Nureyev and subsequently that of Mikhaill Baryshnikov that men in ballet literally took centre stage again. If proof were needed that the phenomenon shows no sign of fading, the Kings of the Dance takes to the Coliseum stage after several occasional seasons in the United States. It would not, I feel, work with a quintet of female dancers, but men are firmly to the fore in ballet and the audience is there to see the finest the world has to offer. The roster changes from season to season, but London saw a pretty strong line-up with Leonid Sarafanov (late of the Mariinsky, now of the Mikhailovsky company), Denis Matvienko of the Mariinsky, Marcelo Gomes of American Ballet Theatre, Roberto Bolle of La Scala Ballet, and, perhaps the greatest male superstar of today, Ivan Vasiliev. Their programme was varied and designed to show off their individual and collective talents.

Vasiliev’s appearances were nothing short of sensational, firstly as the Young Man in Roland Petit’s unmatched Le Jeune Homme et la Mort, and then in an extraordinary solo by Patrick de Bana. As le jeune homme Vasiliev was on intense form, a bored young artist in a Parisian garret room smouldering with unfulfilled desire. The arrival of Svetlana Lunkina’s scorpion-like Death (a superlative performance) unleashes a whirlwind of movement and sexual need in Vasiliev. He acts with his eyes: desire, fear, hurt, confusion all play across his face and he hurls his powerful physique into Petit’s choreographic demands with almost self-destructive abandon. De Bana’s solo for him Labyrinth of Solitude is something almost painful to watch as anguish and torment are coupled with the most gravity-defying leaps, making it an allegory of the life of the virtuoso, forever having to perform for the audience which has no interest in the man and simply wants the tricks. Vasiliev’s physical and interpretational talents are prodigious and even among his distinguished colleagues, he emerges definitively as primus inter pares. 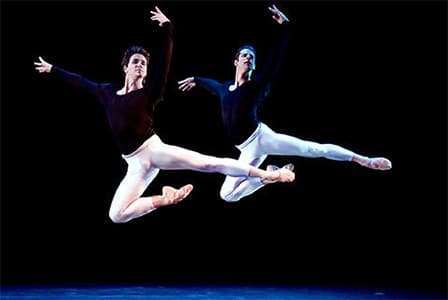 Gomes possesses an undeniable physical presence yet moves with pantherine grace and softness, and was seen to greatest effect in the sophisticated pas de deux for Saint-Loup and Marcel from Petit’s ballet Proust. His Marcel was Denis Matvienko on fine form, displaying elegant line and finely-honed technique. Together they performed this touching duet with great nuance and subtlety, both intensely masculine and intimate. They were joined by the slender-framed Sarafanov in Nacho Duato’s Remanso, a staple around the world for three male dancers with nothing much else to do. It is typical Duato – undemanding, jokey and ultimately vapid.

Sarafanov struggled to make much of Leonid Jacobson’s Vestris, created for the young Mikhail Baryshnikov all those years back but not suited to Sarafanov’s talents; his usual poetically elegant movement was submerged beneath the curlicues and arch campness of this now dated solo.

Bolle is certainly a name: a tall, almost impossibly handsome dancer with the body of a demi-god, and my doesn’t he know it. In Prototype, an overlong piece created for him by Massimiliano Volpini, he not only managed three costume changes, but, thanks to video design by the improbably-named XCHanges Vfx Design, danced with himself, in a gobbet from Swan Lake, duelling in a Romeo and Juliet pastiche and finally leading a phalanx of virtual doppelgängers in Volpini’s deeply pedestrian movement. The video work is of the highest quality, and one’s eye was constantly drawn to the extraordinary changing screen behind Bolle – the first section of ‘computer’ processing of Bolle’s ballet steps was quite brilliant. But, strip away the costumes and the graphics and you are left with steps and moves of unremitting dullness. If Bolle has to dance in praise of himself, he should engage in a little quality control.

The final piece sees the quintet of men on stage together in “KO’D”, a good-humoured, slightly blokey piece by Gomes himself to a piano sonata by another male dancer, and one-time King of the Dance, Guillaume Côté. Gomes has a fluent choreographic voice and knows how to create movement for men; I liked the interaction of the five dancers, not least the mock exasperation of four of them as Vasiliev whizzed around the stage in frightening virtuoso mode. This was a mixed evening as these gala-type constructs tend be, but there was plenty of unbeatable dancing on offer and a pleasing contrast between the works and the dancers themselves. Men in dance continue to ride high.