Kissed by Brel
A theatrical cabaret of songs by Jacques Brel 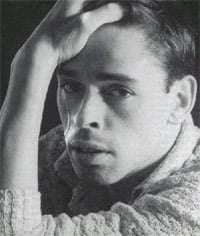 Jacques Brel (1929-1978) was a Belgian-born singer-songwriter who found most of his fame in France. He first worked in his father’s cardboard factory but had no interest in it, so sang and acted in his spare time. He began writing his own songs and achieved some success in the early 1950s and gradually played many of the Paris cabarets and music-halls until he eventually got to work with Maurice Chevalier and Michel Legrand. From the 1960s onwards his style of songs changed to become more philosophical about life, the struggle to survive and the problems of living, and dying. His songs commented on society, religion, love and friendship – all the big issues that concern everybody. He seems to have been a natural pessimist, hated hypocrisy and was totally against conformity in any aspect of life. However, his music varied from the outright funny to the darker sides of introspection.

Brel’s lyrics were poetic rather than pop although he attracted huge audiences to his concerts. His work also attracted other performers to cover his songs. They include Frank Sinatra, Nina Simone, Dusty Springfield, Scott Walker, Ray Charles, Shirley Bassey, David Bowie, Marc Almond and Rod McKuen. The last-named sang translations of some of Brel’s work, although the songs tend to lose the change to English, thereby losing some of Brel’s intent. However, more recent translations sung by the likes of Barb Jungr have stayed closer to the originals. Brel believed his words were more important than his music, although the melodies for his songs are often wide-ranging and exceptional pieces of music.

Claire Watling is a South African singer and actress with a particular liking for Brel’s work. Although women have often sung his songs, Brel was writing them for himself, so that something as autobiographical as ‘Jackie’ sounds a little odd when sung by a tall, glamorous chanteuse draped in a clinging silk evening dress. “Kissed by Brel” is not so much a “theatrical cabaret”, it is more a recital of the songs. Watling does not introduce either herself or her subject to the audience. It would be good if she could present her own take on Brel. If “recital” sounds too low-key, then that is what this show is. Brel’s performance-style bristled with passion, he lived on his nerves and his way of singing reflected this. Claire Watling takes a sort of dreamlike wander through the songs without much passion at all and with little rapport with the audience. It takes forever to get going with ‘Carousel’, which is usually performed at a fair lick.

Watling has an attractive but not very strong voice, which is drowned throughout most of the songs by the insistent persistence of Godfrey Johnson’s piano. Brel wanted us to listen to his words but here the music itself is far too overpowering and some of the arrangements seem out of kilter with the lyrics. There are seventeen numbers in the show (no interval) including some of Brel’s most famous songs such as ‘If You Go Away’, ‘Marieke’, ‘Amsterdam’, ‘Jackie’, ‘Seasons in the Sun’ and ‘If We Only Have Love’. Most are performed in a too-studied way; it’s all a bit too civilised whereas Brel would be busting with rage.

The performance in no way gives a real impression of the man, the author of offbeat, cockeyed songs. The only time Watling shows real passion is when she confronts her audience for ‘The Middle Class’ (Les Bourgeois) in which Brel was satirising those who had made him a success, comparing them to pigs.