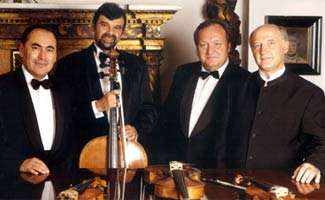 All four players of the comparatively recently formed Kopelman Quartet graduated from the Moscow Conservatory in the 1970s. Mikhail Kopelman himself was first violinist with the famed Borodin String Quartet, while Boris Kuschnir and Igor Sulyga worked with Shostakovich on his later quartets as part of the Moscow String Quartet. Therefore the current ensemble has unparalleled experience in Shostakovich Quartet performance.

The first work of Shostakovich’s fifteen-strong cycle is rather misleading, however, to the series’ eventual content. The concise four-movement structure contains music of genial warmth, the composer glimpsed in a rare moment of complete relaxation, the darker undercurrents haunting much of his work barely visible. The Kopelman Quartet did, however, bring these toward the surface in the second movement, despite the mellow warmth of Igor Sulyga’s viola theme.

The musicians’ familiarity with the music was immediately evident, and the third movement, the nearest thing to a scherzo here, was notable for the spidery figurations led by the muted violins of Kopelman and Kuschnir. The ensuing Allegro was also well on its way to a convincing finish when Kopelman’s bow broke, the horsehair completely parting company with the stick.

It was a surprisingly long time before the rest of the ensemble realised this, though after a quick break they generously performed the whole movement from the start, the offending quadruple-stopped chords applied with the same vigour.

The Beethoven was a performance that took time to place the central slow movement, the heart of the piece, in its fullest context. While the outer fast movements were wrought with uncertainty until the final pages, the players brought a serene timelessness to the Adagio, letting the homophonic passages unfold most naturally.

Kopelman led with slightly more vibrato than his colleagues, but this proved an effective stance given the first violin’s dominance here. The shorter, intervening sections were brightly cast and affirmative, placing the contemplative, hymn-like theme into an appropriate context. While the tuning suffered at the movement’s climactic point, this was more than compensated for by expressive intensity.

The scherzo was perhaps too relaxed, the same tempo carried through the evocative bagpipe music of the trio, which was poignantly realised, though a briefly gruff interlude of 2/2 time intentionally threatened the movement’s good-humoured nature.

The overall feeling was that the Kopelman Quartet fully grasped this work’s massive structure and overall tonal progression. Despite a few more rocky episodes of tuning towards the close, the newly-found major key offered a vivid departure from the straight-faced Allegro preceding it, completing a thoroughly satisfying performance in this BBC Radio 3 Lunchtime Concert.