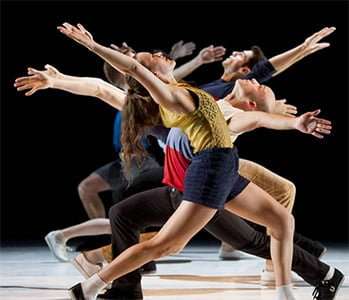 Benjamin Millepied is most definitely l’homme du moment; he has moved seemingly effortlessly from being a principal dancer with New York City ballet to choreographing for the film Black Swan, marrying its star, Natalie Portman, establishing LA Dance Project, a not-for-profit company which has, nevertheless, secured a $1m-sponsorship from the jewellers Van Cleef and Arpels, and is now Artistic Director-elect of the Ballet de l’Opéra de Paris, one of the world’s premier classical companies.

With LADP, Millepied clearly intends to establish his credentials as a director of ‘serious’ work, and so, in the company’s London debut, he presents a distinctly severe programme which, if truth be told, verges on the glum. Not for him the fripperies of, say, Mark Morris, who, in addition to creating dance of uncommon beauty, is unafraid of entertaining his audience and, heaven forfend, making them smile. No, with Millepied it is serious all the way. The brightest work was the first, breezily entitled Murder Ballads, by rising choreographer Justin Peck of New York City Ballet. A trainer ballet (very Twyla Tharp), it is apple-pie, high-school American, movement at one moment evoking a barn hoe-down yet also explores relationships in a series of duets and ensembles. Each of the six dancers has a chance to shine, the laurels going to company Ballet Master, Charlie Hodges, whose movement quality borders on the sculptural. Bryce Dessner’s buoyant score underpins Peck’s choreography, although the Murder Ballads (an American musical tradition) peek through both sound and on the stage with hints of unease and confusion.

Millepied contributes his own choreography in the seemingly interminable Reflections, prompting my companion to enquire at its end “it must be December, have you written your Christmas cards yet?”. David Lang’s piano score (played with gutsy fortitude by Andrew Zolinsky) lasts a tuneless 40 minutes, and is matched in every way by Millepied’s movement. With huge lettering spelling STAY and GO towering behind them, the dancers indulge in an endless succession of duets and larger ensembles, the choreographer throwing in every tick of modern dance imaginable and only rarely, such as the duet for two men, the invention rising above the predictable. The dancers are fully committed to this exploration of separation and loss, and twist and turn, shuffle and crumple, twitch and slap with total engagement. But fun, it sure ain’t.

Nor is William Forsythe’s Quintett (1993), created in collaboration with five other collaborators. This piece shows off LADP’s dancers to great effect, but as a work it is difficult to love. Firstly the infuriating score Gavin Byers’s “Jesus’ Blood Never failed me yet” sung/spoken over and over again by what sounds for all the world like an Irish drunk and accompanied by rich, Romantic orchestral chords. Secondly, despite the dizzying inventiveness of the choreography, the myriad movements, poses and dynamics which the dancers are called upon to execute, it all seems rather pointless – five individuals dashing hither and thither to no real purpose. There are moments of startling beauty and surprise, but the work lacks the coherence to make them into something more.