Scared possibly by the inclusion of Berg’s brief one-movement Piano Sonata (1907-8), the audience was far thinner on the ground than this distinguished recital merited. Had it been possible to bill the event as Brahms’s Opus 5 Sonata only and to have included the Berg as an unannounced bonus, one suspects the Hall would have been as full as it normally is for a BBC Radio 3 Lunchtime Concert. Such – for anything other than the familiar Violin Concerto – is still the effect of Berg’s name a century later.

If so, this was a pity since Berg’s Sonata is one of those works which, Janus-like, looks both forwards (it was written under the influence of Schoenberg) and backwards to the Viennese classics, and it contains nothing to scare anyone. Berg had been intending at least three movements but Schoenberg rightly persuaded him that this 13-minute work (Vogt’s timing) was complete in itself. Its short span contains a density of incident and a turnover of events which “covers more harmonic ground … than any ordinary Viennese sonata in four movements” to quote Gerald Larner’s excellent programme note. Being Berg, the music is of course supremely lyrical, opening with a Tristanesque motif and rising to two remarkable climaxes before subsiding into an extended close of dream-like intensity. Lars Vogt’s assured performance carried a remarkable conviction and made the best possible case for the work. 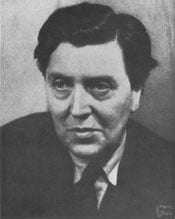 With the Brahms we were back on traditional Wigmore territory. This may not have been the most heaven-storming account of the Sonata but its virtues were legion nonetheless. Without strain, Vogt naturally produces a piano sound of real depth, ideal for Brahms and he has the trick of varying pace and character in a Classical sonata without losing the line; this was heard to great advantage in the way the more reflective moments of the first movement development (which can meander) were held together and also in the shadowy finale, sectional music whose various episodes were superbly paced and integrated.

This same grip of structure was in evidence in the two slow movements, the first flowing easefully, its hushed central section perhaps a little too slow, but everything so carefully husbanded that its final all-enveloping climax made an overwhelming impact, and the second, ‘Rückblick’ (retrospect) – in which the earlier movement’s idyll is metamorphosed into a bitter recollection of past happiness – was presented without fuss but at the same time with an acute awareness of tone colour (there is a passage just before its close which might have been written by Debussy so subtle was its colouring in this performance). In the central scherzo Vogt produced an ideal combination of muscle and Schumannesque fantasy.

This was a deeply satisfying recital concluded with an encore in the form Schubert’s Moment Musical in F minor.