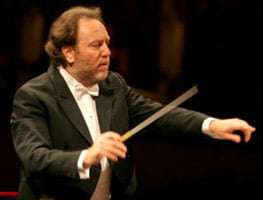 Riccardo Chailly is Gewandhauskapellmeister in Leipzig. The orchestral exposition of Brahms’s Violin Concerto was wonderfully rich and warm, bringing out the work’s kinship with the Second Symphony of the previous year. Details that normally go unnoticed here emerged as naturally as breathing. The ideal marriage of transparency and warmth was reminiscent of Claudio Abbado’s approach to this repertoire.

Leonidas Kavakos, playing the ‘Falmouth’ Stradivarius of 1692, seemed to lack a certain measure of sweetness in his upper register. He was technically secure but largely unremarkable. He only seemed to come alive in the cadenza but even then was eclipsed by the orchestra’s return (Chailly emphasised the second-horn pedal-note to inject some Brahmsian richness into the texture).

Rarely has the woodwind choir of the slow movement emerged as so beautiful of tone and so expertly balanced as here; later in the movement a simple sustained string chord became a moment of great poignancy. The finale brought tremendous energy from the orchestra, which Kavakos tried to equal, mainly by physically bouncing about a lot. Better to concentrate on Chailly’s loving affection lavished on the harmonic inflections of the accompaniment.

The inclusion Arvo Pärt made a lot of sense. Cantus in memoriam Benjamin Britten (1977) is very simply constructed yet highly effective in its emotional language. A tolling tubular bell punctuates curling, descending A minor scales. Although a vehicle for the orchestra (to show off the strings’ luscious sound), this emerged as a highly affecting lament.

Fate appeared in another guise in the Tchaikovsky Fourth Symphony, here forceful and unavoidable. Chailly’s conducting of this work revealed the same awareness of line and texture allied to structural direction that was found in the Brahms. Again, as in the Pärt, a descending scale is of vital importance, and Chailly was sure to highlight significant occurrences. A thread of darkness ran through the first movement, with climaxes carefully prepared and telling.Suavity was the keyword for the Andantino in modo di canzone, while accuracy of articulation (whether pizzicato strings or staccato brass) was the order of the day for the scherzo. It was the finale that sagged, though, despite opening in a blaze of light. The same unrest that underlay the first movement similarly permeated the fabric of the finale, but the voltage was surprisingly low.

There were two encores: the ‘Intermezzo’ from Act Three of Puccini’s “Manon Lescaut” (the greatest compliment I can give is to say that this did not sound like a German orchestra playing Italian music), and a fast, furious and unashamedly virtuoso ‘Death of Tybalt’ from Prokofiev’s ballet-score Romeo and Juliet.