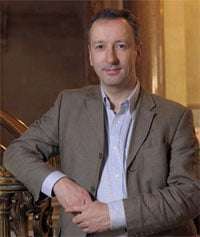 Consistently fresh and inventive, it’s hard to believe that Les Arts Florissants is 30 years old and currently celebrating three decades at the forefront of authentic early, baroque and classical music-making with a series of concerts in both Britain and France. This concert was directed by Paul Agnew, who also sang one of two tenor parts in a programme devoted to Monteverdi’s “Sixth Book of Madrigals”.

A composer of great intellect and subtlety, Monteverdi is something of an acquired taste, and his Sixth Book is not immediately approachable. The ten madrigals in the volume were written 1607 and 1612 at a time of great personal loss for the composer, first the death of his wife, quickly followed by that of his singing-student and foster-child Caterina Martinelli. Shortly after, he was sacked as choir-master at the ducal court of Mantua.

Despite the pervading feelings of loss and despair, the Sixth Book does have its lighter moments. The opening of ‘Zefira torna’, for example, is sprinkled with glittering arpeggios on harp and harpsichord. ‘Qui rise, o Tirso’ is even more varied, with duets and trios alternating with recurring refrains. The final madrigal, ‘Presso un fiume tranquillo’ has an operatic style that makes it the most dramatically appealing of the set.

The rest of the madrigals are less engaging. The opening ‘Lamento d’Arianna’ is complex and intense, but very, very long. The ‘Sestina’ (subtitled Lament of a Lover at the Tomb of his Beloved) is clearly an expression of the composer’s grief at the death of Caterina. Sung unaccompanied by two sopranos, tenor and bass, it was perhaps too personal to resonate with today’s audience.

Not that the near-capacity audience in the Union Chapel seemed to mind. Such a presence in the chilly and lugubrious church was testament to the loyal and appreciative following that Les Arts Florissants has garnered; not surprising given singing and playing of the highest standard. Agnew, who directed with discrete glances to his fellow performers, displayed vocal suppleness and range. Fellow-tenor Sean Clayton, in contrast, sounded a little taut and dry in some passages. The three sopranos (Miriam Allan, Hannah Morrison and Maud Gnidzaz) sang with remarkable agility, although more differentiation between their timbres may have added more variety and contrast to the ten madrigals.