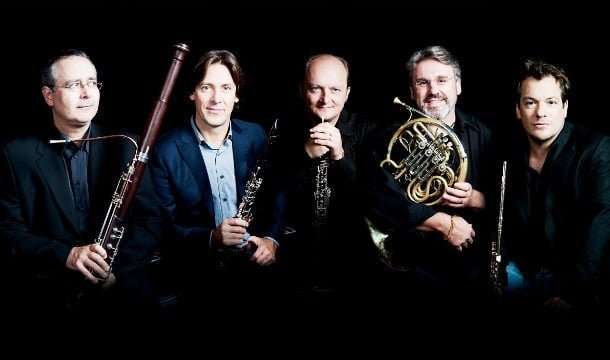 Les Vents Français is a group of internationally acclaimed soloists, formed out of a shared desire to explore the corners of the repertoire for wind quintet – in this case with pianist Eric Le Sage for company. A generous programme plotted a roughly chronological course with France as its geographical centre.

Yet the Sextet of Louise Farrenc (1804-1875) is not discernible as French from its style alone. Farrenc writes assuredly while harking back towards Mozart, the piano-writing itself speaking more of the influence of her teacher Hummel. It was a sobering thought to read that Farrenc was only paid half the sum of her male counterparts when appointed Professor of Piano at the Paris Conservatoire in 1842. Her Sextet, written ten years later, has a resilience suggesting its composer was made of stern stuff. Certainly the first movement is notable for its strength – too much so in this performance, as the dynamic was rarely less than forte. The second one took more time to breathe, assuming the form of an aria with attractively phrased themes from piano and horn. The finale resumed the obdurate mood of the first movement, and was very well played.

Ludwig Thuille’s Sextet is more obviously romantic and its melodies much more immediate, a fact acknowledged by the players’ more affectionate phrasing. The third movement ‘Gavotte’ was a particular delight, its memorable theme given a touch of comic theatre. The first movement, richly Brahmsian, sported a warm-hearted horn theme beautifully phrased by Radovan Vlatković, while the finale is notable for a couple of unexpected twists and turns, its move into the minor key especially well managed.

After these two substantial works the cheeky brevity of Ibert was refreshing, the music unbuttoned and carefree. The players stepped up a gear, their humorous interplay bouncing back and forward in a very brisk ‘Jig’, while the doleful duet between Emmanuel Pahud and Paul Meyer was a sobering interlude in the Andante.

Caplet’s Quintet for Piano and Wind is an early work, written just before the composer, in his early twenties, won the Prix de Rome in 1902. While Caplet is often-mentioned solely for his work with Debussy his is an individual voice, one that was only just in development in a Quintet looking to Fauré and Saint-Saëns for some of its inspiration. The emotional centre of the four movements is a striking Adagio notable for its questioning harmonies and darker shades, a highly effective counterpart to the bright first movement.

Though none of the repertoire chosen was substandard, Poulenc’s Sextet emerged as the best piece of the evening by some distance, and received the best performance – if again on the loud side at times. The first movement has a dialogue that ricocheted brilliantly between the instruments, from entertaining to the suddenly reflective, the players clearly enjoying the contrasts. Eric Le Sage led with impressive clarity, while Vlatković contributed several meaningful solos. The thoughtful ending was well done, but was not the end of the concert, for Roussel’s Divertissement (Opus 6) – also for piano and wind quintet – provided a delightful encore, bubbling over with melodic invention.