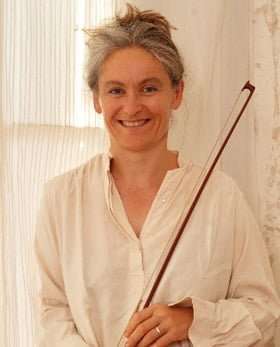 Le Concert Spirituel’s visit to the Spitalfields Winter Festival offered an eclectic selection of Baroque compositions from different countries and reflecting various private temperaments and public occasions. Here comprising an ensemble of ten players, the group tended to explore the detailed and delicate aspects of these works with a generally silken and cohesive sonority. Particularly in the two Purcell compositions they evoked the sound of a viol consort (although not playing such instruments) with a languid opening to the In Nomine in G minor which then became livelier with the more studied imitations and interactions between the two uppermost violins. In the ingenious Fantasia Upon One Note, Tormod Dalen threaded that note seamlessly and unobtrusively on the cello through the performance so that it was not a monotonous drone, but revealed to be cushioned in the centre of the texture in the brief silent moments between sections, binding the whole together. Dalen also changed the speed of his bow strokes between passages, subtly varying the quality and tension of the tone in accordance with the character of the surrounding music.

Before that, Alice Piérot led the ensemble from the violin through the lively contrasts of Muffat’s Suite No.2 from Florilegium Primum, expounding hope and joy. In the Biber Sonata – from another significant and unjustly overlooked collection of Baroque instrumental works – Le Concert Spirituel evinced a graver mood, but still achieved a beautiful homogeneity of sound. Closing the first half, in Zelenka’s vivid Hypocondrie a 7 Concertanti there was some leaden playing from the cellos and double bass, surely deliberate in order to convey the hypochondriac condition. The bittersweet dissonant turns (almost reminiscent of Purcell) and unexpected harmonic shifts were subtly emphasised by the ensemble; and as the programme note omitted any discussion of this piece, it is probably to be assumed that the performers’ mannered delivery of the second movement’s fugal entries were also deliberately matched to this work as character music.

Charpentier’s suite Pour un Reposoir was composed to accompany the procession of the Blessed Sacrament on the feast of Corpus Christi, and combines sacred and profane elements, with a ‘French Ouverture’ and final ‘Allemande’, as well as instrumental elaborations of the plainsong Tantum Ergo. Although the ‘Ouverture’ is in the minor key, Le Concert Spirituel produced a conspicuously richer and more golden sound compared to anything in the first half of the concert, and Piérot carried the Tantum Ergo melody as though it were graceful aria.

The programming of Corelli’s Concerto (Opus 6/8) was the one nod towards the festive season (this is the famous ‘Christmas’ Concerto, on account of its final ‘Pastorale’, representing the shepherds tending their flocks). This was a nimble performance, particularly with a fast and furious penultimate Allegro, but the unbroken lead-in to the ‘Pastorale’ itself resulted in the latter not being as restful and mellifluous as it might have been.

Finally J. S. Bach’s Third Brandenburg Concerto was also ebullient but more light-hearted, perhaps too much so for its own good as it lacked clearly defined contours, but in its own terms the rendition was delightful. Etienne Galletier gave a solo improvisation on the theorbo for the slow movement, which was charming but did not sound very Bachian, and the Phrygian cadence (all that Bach notated for this movement) was omitted, making this interpolation seem awkward. But these were minor shortcomings in a characterful and accomplished programme.