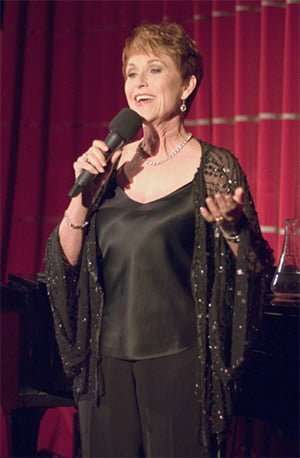 A warm welcome is due to singer-songwriter Amanda McBroom, making her first appearance in London in 12 years. With her impeccable vocal styling and superb choice of material, including half-a-dozen of her own compositions, she brings to The Crazy Coqs a class act. After starting with a sparkling combination of ‘Let’s fall in love’ and ‘Let’s do it’, she introduces two of her own songs, ‘Hot in here’, expressing the hope of some prolonged warm weather, and the humorous ‘Old love’, a tale of a rekindled affair that builds to a great punch-line. Both were written with McBroom’s latest collaborator, Michele Brourman, who also provides sterling support at the piano.

McBroom salutes this stylish art-deco venue by commenting that a room so perfect cries out for musical fare of the most sophisticated kind, the cue for Cole Porter’s imperishable ‘I’ve got you under my skin’. McBroom’s voice with such tuneful standards is a model of clarity, but her vocal versatility allows her to switch easily to a bluesy, guttural low-down style for such risqué fare as ‘Flexible girl’, changing back to pristine balladeer for ‘The twelfth of never’.

McBroom, who injects much polished humour into her act, is also an actress. She appeared on Broadway in the compilation show, Jacques Brel is Alive and Well and Living in Paris, and in the musical See-Saw. She talks of the great impact the Brel score had on her, and she delivers a moving version of ‘Ne me quitte pas’, commenting that she used to sing the English translation by Rod McEwen (‘If you go away’) until she realised that it did not approach the passionate desperation of the original. See-Saw had music by Cy Coleman and words by Dorothy Fields. McBroom pays tribute to the great Fields by singing the masterpiece ‘The way you look tonight’ (music by Jerome Kern).

Later, she sings her own stunning success, the heartbreaking ‘Errol Flynn’ (written with Gordon Hunt). McBroom’s father, known professionally as David Bruce, was a moderately successful movie actor in the 1940s, playing supporting roles to Flynn in three films, and later starring in B-pictures made by Universal Studios, but his career faded after World War Two. McBroom’s beautiful ballad, inspired by his life and their relationship, has been appropriated by Barbara Cook, Anne Reid and Salena Jones, but there is a special frisson when hearing it interpreted by its creator.

It’s a hard number to follow, but McBroom brings down the house with a rollercoaster performance of Brel’s breathless cry of longing for a lost love, ‘Marieke’, then gives us her biggest hit, ‘The rose’, before concluding with a composition she has dedicated to her husband of 42 years. Titled ‘No fear’, it delineates all the frightful things that she could face, such as spiders and snakes, “but the only thing I fear is losing you.” It’s a lovely song with which to conclude a most rewarding evening that could be said to define the art of cabaret.