Students of the University of Theatre and Film, Budapest 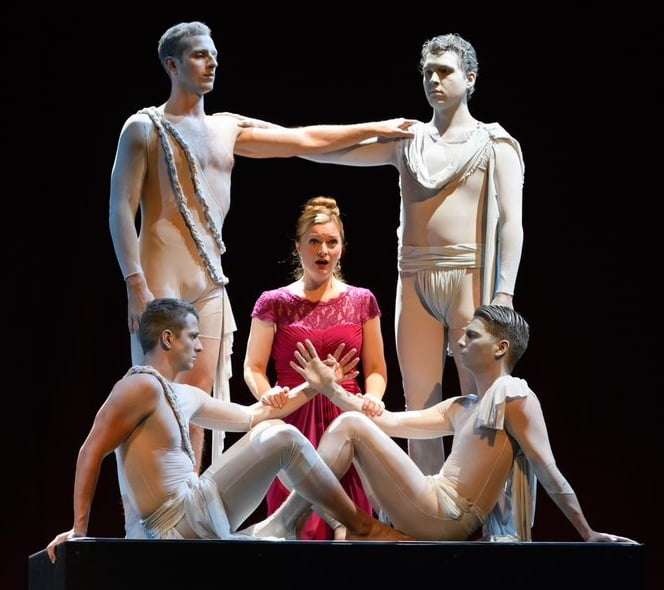 From 2011 Iván Fischer has returned his distinctive production of Don Giovanni to Lincoln Center’s Mostly Mozart festival. Christopher Maltman’s powerful portrayal of the title-role led a strong cast and this was the second of three performances. Fischer prefers the term of “staged concert … a complete harmony and coordination between music and theater.” He opts for the original Prague version, preferring the seamless flow of the plot, without the interruption of the set-pieces that Mozart added for the Vienna premiere, and he uses ‘period’ horns and trumpets to avoid overpowering the singers.

While reflecting Mozart’s first conception, Fischer’s direction bears no relation to eighteenth-century theatrical practice. The stage is completely black with two large platforms, one taller than the other, on either side of center. Actors from Budapest’s University of Theatre and Film, draped in costumes to suggest statues from classical antiquity, configure their bodies to represent props and scenery and at times sing and dance, functioning as the chorus. Clever uses of this troupe include the opening scene, when Giovanni causes a domino-like avalanche of statues to crush the Commendatore; and at the end when the actors grasp the writhing Don and enfold him out of sight – a more fascinating way for him to enter Hell than the usual descent into a flaming pit. The principals are in modern dress – Giovanni and Leporello’s exchange of clothing reduced to swapping hats – and the masked trio merely hold their hands over their faces and peek out between their spread fingers.

Maltman has depicted Don Giovanni more than one-hundred-and-fifty times, an intricate knowledge that makes his every reaction and gesture perfectly nuanced, revealing the depth of the Don’s addiction to womanizing and his innate ability to exude the charm that draws his victims to him. Maltman’s voice has gained power and depth over the years, yet is flexible enough to be dark or delicate, shattering or whisper-soft as appropriate.

With his comic timing and rich baritone José Fardilha was an ideal Leporello, his ‘catalog’ aria a tour-de-force enhanced by actors representing the turning pages of his book and serving as exemplars of the types of women mentioned. 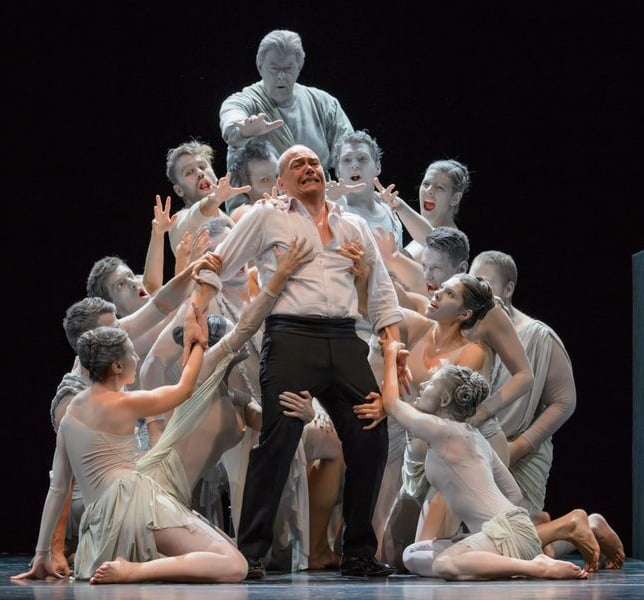 The three sopranos were terrific: Laura Aikin brought dramatic heft and upper-register sparkle to the reserved Donna Anna; Lucy Crowe made the passionate Donna Elvira a persuasive and complex character, simultaneously harboring hatred and sexual attraction for the Don; and Sylvia Schwartz was a winning Zerlina, making the ingenuous peasant girl sympathetic as she soothes Masetto, the excellent Matteo Peirone, who had us laughing but also empathizing with his pain and anger as well as his deep affection for his bride-to-be.

Zoltán Megyesi portrayed Don Ottavio as an aloof nobleman, remaining at a distance from his beloved Donna Anna and her slain father at the very moment when comfort is needed. He was vocally admirable, his penetrating tenor beautiful in ‘Il mio tesoro’ and in ensembles, and Kristinn Sigmundsson was an imposing Commendatore, his ringing bass making the final confrontation with Don Giovanni compelling and chilling.

Fischer’s inspired conception brought suitable tempos throughout. The Budapest Festival Orchestra was in fine form, the three ensembles in the banquet scene particularly fine playing in different meters to accompany the revelers; and the wind ensemble, entertaining at Giovanni’s party, was delightful as it played variations on ‘Non più andrai’ from Figaro, at the time a popular tune in Prague.

This is a sensational staging, an exemplar of the maxim ‘less is more’.