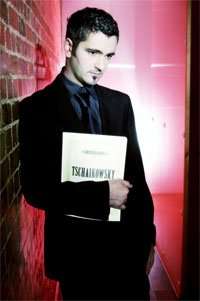 In choosing to perform the first two books of Liszt’s Années de Pèlerinage on an 1851 Erard piano, Daniel Grimwood’s intention was to take his audience back in time to experience how the composer himself might have heard the music.

On his frequent visits to England, Liszt often played on an Erard; the French company’s UK offices located in Great Marlborough Street, a mere five minutes from where Wigmore Hall is located (not that the latter existed in Liszt’s time!). Where this particular Erard came from was not clear, but Grimwood brought with him a technician – Stuart Holdstock – and he deserved a round of applause for sterling work in re-tuning the instrument in the interval.

In the pianist’s programme-note on the instrument he detailed the challenges of performing on an Erard – a few more bangs, clicks and twangs were inevitable, the cramped keyboard making accuracy harder to achieve. And while there were indeed occasional wrong notes they simply added to the fallible nature of music already markedly different in temperament. Grimwood also explained the ‘Bach-Lehman’ temperament he was using, with concert ‘A’ resounding at 440 Hz.

The results were something that might have been billed ‘Liszt Revealed’. With astonishing technical command at his disposal, Grimwood was able to divert the attention of his audience away from considering the demands made on the player to the music itself, though the former elements were obviously present in works as the ‘Dante’ Sonata (which closes the ‘Italie’ leg).

Instead it was a revelatory experience to hear this music in fresh sonorities, to note that Liszt’s part-writing seems markedly less congested when performed on an instrument such as this, and to revel in the eccentricity each different key afforded. When lower chords were played the instrument could almost be heard to growl, while upper register runs in ‘Sonetto 123 del Petrarca’ of ‘Italie’ took on a harp-like sonority. Grimwood’s close attention to dynamic detail was also helped by the fact that the Erard does not achieve the volume of a modern Steinway, for instance, thus removing a common failing of Liszt performances in tending to over-project.

Grimwood’s interpretations of the first two Books of the ‘Years of Pilgrimage’ had much to commend them, and he often moved between pieces without as much as a pause for breath. This gave continuity in the three ‘Petrarch’ movements, and also in the opening five pieces of ‘Suisse’, pointing naturally towards the climactic ‘Vallée d’Obermann’. Here the left-hand theme led with initial purpose but was soon more withdrawn, the questioning aspects of the music imploding, then growing again to a thundering fortissimo. Prior to this a dramatic ‘Orage’ found some dark rumblings in the Erard’s lower register, while the detail in ‘Chappelle de Guillaume Tell’ and ‘Au Lac de Wallenstadt’ was beautifully shaded, aided by careful use of the pedals.

‘Italie’ was naturally pointed towards its crowning achievement, the single sweep of the ‘Dante’ Sonata, though there was much to enjoy on the way in the form of a fluid ‘Sposalizio’ and a deliberate ‘Il Penseroso’, which darkened considerably as it pressed on with a slow tread. Meanwhile Grimwood lent a processional air to ‘Canzonetta del Salvator Rosa’, adding a nice touch of humour through rubato.

The ‘Petrarch’ movements unfolded naturally, the only hindrance a slight loss of legato through ‘Sonetto 104’, the tension lifting a little. Not so with the following ‘Après un lecture du Dante’ (‘Dante’ Sonata), Liszt’s response to reading Victor Hugo’s poem. With the piano having noticeably settled by this time, Grimwood allowed it to break free in the passages of extreme virtuosity, though here a careful use of silence meant the initial, sinister octaves and tritones in the left-hand were more effective. As he did so throughout, Grimwood played the louder passages with controlled power, sitting remarkably still but not surprisingly breaking sweat by the end.

A beautifully chosen encore followed this tour de force, in the form of ‘Die Hirten an der Krippe’, the third movement from Liszt’s Weinachtsbaum (Christmas Tree) Suite. Once again this exploited the lovely timbre of the mid- to upper-register of the Erard, played in lilting style.

To hear Liszt’s music performed in this way proved something of a watershed. It served a reminder of what an original thinker and composer he was, and how he continues to demand further investigation to bring his music to a wider audience and understanding.