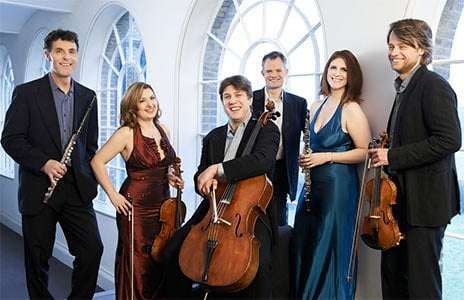 The London Conchord Ensemble began this BBC Radio 3 Lunchtime Concert at Wigmore Hall with one of Mozart’s sunniest works. The Oboe Quartet, dating from 1781, is thought to have been written for Friedrich Ramm, a member of the electoral orchestra in Mannheim. He was clearly a virtuoso, judging by the challenges set by Mozart in the outer movements. Emily Pailthorpe tackled these with relish, and with a consistently pleasing tone, notable for its unforced purity. At times the busy string parts assumed a greater importance in the balance than perhaps they should, but they were nonetheless consistently well played with a fresh-faced and energetic approach. By contrast the Adagio was tinged with melancholy, beautifully phrased.

Prokofiev’s six-movement Quintet was next. Its rarity status deserves to be rectified, for the work – unusually scored for violin, viola, double bass, oboe and clarinet – has plenty of character, not to mention consistent melodic and rhythmic interest. The piece began life as a ballet, Trapèze, commissioned by Boris Romanov in 1924. Because Prokofiev worked so quickly, he completed his assignment well before the staging was ready and published in advance of the premiere. The music sits under the shadow of Stravinsky on occasion, particularly in the syncopations of the third movement and in the language of the vigorous fifth. This is far from a derivative work, however, and the London Conchord Ensemble illustrated the resourcefulness of Prokofiev’s scoring. The ghoulish, low-range sounds of Nikita Naumov’s double bass led off the second movement, grinding out the theme with a smile before the movement (surely one of the very few instances with the curious Andante energico marking) unfolded. Meanwhile the fourth lent on the pesante aspect of its tempo marking, its sullen countenance proving impossible to shift. This performance alternated energy with eloquence, the five musicians enjoying Prokofiev’s harmonies, both sweet and sour, together with some unusual colours.

A year on from Prokofiev’s Quintet, Schoenberg conducted the first performance of a new arrangement of his Chamber Symphony No.1 in Barcelona. The reduced instrumentation in Webern’s arrangement replicates the Pierrot Lunaire ensemble of flute, clarinet, violin, cello and piano, in order that the two works could be performed together. Even in its original, fifteen-player version, the Symphony imposes fiendish technical demands on its performers, so to condense its already dense musical material to just five exerts greater pressure both on the exponents and their audience. The London Conchord Ensemble rose to the challenge impressively, Thomas Carroll manfully shouldering the gradients of the imposing Allegro theme. This typified the group’s dedicated and consistently stalwart approach, taking the quicker sections by the scruff of the neck while allowing room for the slower second thematic group, which brought keen reminders of Mahler. Brahms was more in evidence when the counterpoint rushed by, the ear pulled this way and that but helped considerably by the rhythmic definition given by Julian Milford who helped keep Schoenberg’s thinking in focus.