The 18th century knew how to do ‘royal weddings’ properly. With one of the greatest composers in Europe at their disposal, the Hanoverian court in England was able to call upon the services of Handel to provide this Serenata as part of the festivities for the marriage in 1734 of the Princess Royal, Anne (daughter of George II) to Prince William IV of Orange. As a Serenata, Parnasso in festa does not comprise a dramatic narrative as such, unlike an opera. But Handel’s score is more ambitious than his Italian stage works in many respects by utilising an expanded orchestra (with trumpets, horns, and timpani – only rarely used in the operas) in a musical sequence which features choruses among its various arias and therefore greater variety and flexibility than the usual format of opera seria at the time. Rather, the work parallels the form of English oratorio which Handel was then pioneering, and some of the material was in fact mined from his most recent example, Athalia, which had not yet been heard in London. 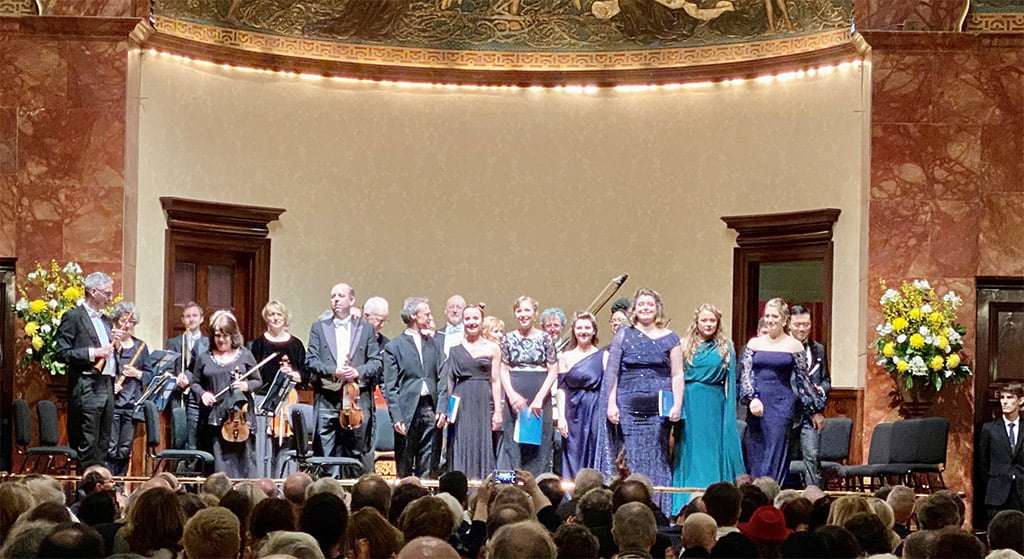 An illustrious cast of mythological characters is called upon to celebrate the forthcoming union of Peleus and Thetis (and by extension that of Anne and William) – surely few more momentous nuptials could have been selected from the episodes of Classical myth, as it was at this wedding that Eris threw the apple of discord which precipitated the Trojan War, and the married couple would produce the hero Achilles. Further, unlike the cloying, sentimental expressions of romantic ‘lurve’ which feature in so many contemporary wedding celebrations, from royalty down, the legendary coterie of Handel’s work – three Muses, Mars, the huntress Clori, and Apollo and Orpheus – soberingly remind the audience of the essential fragility, even futility, of human relationships by recounting the sadly curtailed loves of the latter two figures for Daphne and Eurydice respectively.

As a highly edifying wedding entertainment, then, the Serenata stands in the same tradition as the intermedi and operas of late Renaissance Italian courts – setting the same myths to serve as an arresting lesson to the powerful and wealthy about the inherent tragedy of human life, just at the end of the 19th century Nietzsche would again bring to the attention of the liberal bourgeois mindset, wedded to an irrational, deluded faith in scientific progress and reason as he saw it.

The exalted cast of Classical luminaries was taken by an attractively varied and musically persuasive group of singers, necessary in a work featuring almost entirely upper voices – Apollo and Orfeo were created originally by castrati. Katie Bray and Charlotte Bowden brought nobility to their accounts of the latter roles, the first expressing command with quiet fluency, the other unassuming and comparatively delicate (notably in ‘Ho perso il caro ben’, his lament on losing Eurydice). As the Muses, Keri Fuge was penetrating and forceful as Clio – especially in evoking the dangerous power of beauty in ‘Cor un vezzo’ and perhaps too much so in ‘Nel spiegar sua voce al canto’; Jess Dandy authoritative as Calliope; and Annabel Kennedy’s Euterpe unfussy but expressive. Emily Sierra’s one aria as Clori, extolling the hunt, was nimble and eloquent, whilst bass John Lee provided a lithe and tonally crisp performance as Mars, avoiding the temptation of too gruff or strenuous a rendition.

Adrian Butterfield directed the London Handel Orchestra with three additional male singers to bolster the solo cast together in the choral numbers. Those movements were urgent and emphatic, lending some drive and tension to the performance which Part One was otherwise rather missing, as the arias required more nuance and contrast given the lack of much dramatic momentum in the libretto. Parts Two and Three were significantly better in this respect, the already crowded stage of the Wigmore Hall rounded out with brass and timpani. Certainly this was a performance marked by dignity and elegance, but a more festive, ebullient presence would also have been welcome.