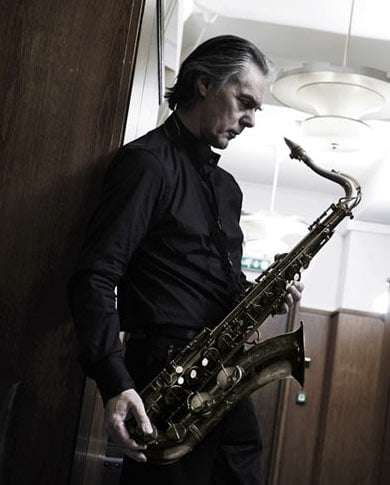 The last CD from the Jan Garbarek Group was also its first live album, Dresden (2009), and Garbarek’s getting on a bit: seventy next year. Also, there was a sense of déjà vu as this was the same line-up in the same venue as for LJF 2012. So when the concert opened with a sound like a glacial wind blowing through the auditorium, icy shorthand for Garbarek’s Norwegian aesthetic, I half-wondered whether he would be tempted to churn out a valedictory ‘greatest hits’ concert: pristine but predictable.

Fortunately he’s too much a musician to let that happen. Yes, we had the expected ensemble pieces delivering Garbarek’s simple-enough-to-whistle melodies. But beneath the surface sweetness there’s usually plenty of bite, and in full flight Garbarek’s keening soprano and tenor dig back to his free-jazz roots.

Increasingly snowy-haired, Garbarek cuts a statesmanlike presence and during the group performances one sensed the band subsuming their personalities to the great man’s will: fretless bassist Yuri Daniel as stand-in for Eberhard Weber (who, almost as much as Garbarek himself, defined the band’s sound), Trilok Gurtu’s ‘hit and shake everything in sight’ approach to percussion a strong reminder of his predecessor Marilyn Mazur, and long-time collaborator pianist Rainer Brüninghaus (twenty-five years and counting) as, well, himself.

But like a good statesman, Garbarek knows how to bring out the best in others and gave all plenty of time to show their personalities through their solos, even leaving the stage to ensure the spotlight was firmly on them. Daniel’s solo switched from the Weber-like legato demanded by the group sound to slap bass and a robotic funk, Brüninghaus burnt the keys with the heat of his fireworks, and Gurtu covered all sorts of percussive terrain: rock-like drumming one moment, tabla-playing nearly fast enough to break the sound barrier the next, interspersed with theatrical touches such as dipping a cymbal in water to change its timbre.

Another delight was the interplay between Gurtu’s Indian music vocalisations and Garbarek’s seljefløyte (Norwegian willow flute) – a bridge of air spanning two entirely different, but surprisingly compatible, musical heritages. Faster and faster they went, rather like the audience-participation clapping during the encore that brought most of the audience to its feet for an ovation.