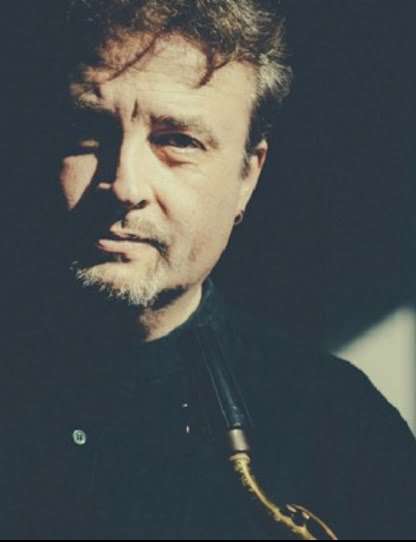 Some musicians are great news for reviewers, not only because they play music that’s easy to praise but also because they tell you what they’re playing. Jan Garbarek from a few nights earlier didn’t utter a single word for the full two hours, but Tim Garland – another exceptionally fine saxophonist – not only told us the tunes but gave us anecdotes as well. We even got a fact sheet from the ushers.

Just as well, because the opener played by the trio of Garland, Goloubev and Sirkis was one of those tunes that nags you with familiarity but you can’t quite place. Thelonious Monk? ‘Bemsha Swing’? I got there, eventually, but was glad to have it confirmed: along with a tale about how Garland has often played it with Chick Corea as a warm-up during sound checks. Switching to soprano, Garland then played a lovely version of the Corea tune ‘Armando’s Rhumba’ with the trio, before the string section joined to complete the first set, dedicated to Corea.

The Sacconi String Quartet has played with Garland’s Acoustic Triangle (on the 2009 album 3 Dimensions) and the trio and strings meshed well, with Goloubev’s warm bass the overlap in this Venn diagram of jazz trio plus strings. Garland’s this-night-only arrangement of Corea’s standard ‘Crystal Silence’ was full of legato strings, but the writing was astute enough never to become saccharine. On ‘Anna’s Tango’ Garland’s bass clarinet danced beautifully with the double bass, and Sirkis’s unusual drums configuration (no hi-hat but a mounted tambourine, bundled sticks instead of normal sticks) provided suitable timbres as well as rhythm.

The second set was inspired by Stan Getz’s Focus (1961), his personal-favourite album. Eddie Sauter wrote string arrangements but no melodies, leaving gaps for Getz to improvise. On the original, Getz’s solos are so assured, so melodic – so right – they might as well have been written. Garland obviously thought so too, playing ‘So Late, So Late’ as a faithful transcription. Even Garland’s tone – soft and beautiful anyway – seemed to adopt some of the shimmering silkiness of Getz.

Garland sensibly resisted the temptation to slavishly copy the rest of the album, re-working each tune in album order and even changing the names: ‘Her’ becoming ‘Maternal’, for example, and ‘Pan’ becoming ‘Evergreen Song’. The set finished with a return to ‘So Late, So Late’ but this time reworked rather than transcribed. In-between, we had fine soloing from Goloubev on bass and Thomas Gould on violin; and on ‘Dream State’ (originally ‘Once Upon a Time’) suitably atmospheric coloration from all: spooky strings like something from a nouvelle vague film, bells and mallets from Sirkis, and rich multiphonics from Garland.

And as if this weren’t already enough of a treat, Garland glanced at his watch, said we had five minutes spare, and reprised a tango to round off a thoroughly satisfying concert.