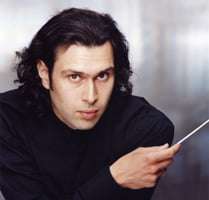 Exactly 75 years ago to the day the London Philharmonic Orchestra gave its first-ever concert in the Queen’s Hall under its founder, Sir Thomas Beecham. Ernest Newman, not easily impressed, wrote of that opening concert “You Londoners want to know what an orchestra should sound like? Well, just listen to this”. One suspects that his response to this latter-day celebration – which included one of the works played at that first concert, the ‘Prague’ Symphony – would have been similarly impressed.

Although Vladimir Jurowski has worked with the LPO since he became Music Director of Glyndebourne Festival Opera in 2001, becoming the Orchestra’s Principal Guest Conductor in 2003, he only became its Principal Conductor (succeeding Kurt Masur) at the beginning of this season. On the evidence of this concert it is a marriage made in heaven.

This celebratory concert was prefaced by a fanfare by the orchestra’s Principal Horn, Richard Bissill, a brief piece scored for two brass octets positioned opposite each other rather as Gabrieli’s ceremonial brass music, only in this case the two brass groups were linked by four horns playing in unison. According to the composer the music is “based on a jazz-waltz rhythm arising from the words ‘seventy-five’. (Try saying it with a swing!)”. It got the evening off to a flying start.

For the ‘Prague’ Symphony we had antiphonal violins playing with minimal vibrato, ‘authentic’ trumpets and valve-less horns as well as ‘period’ timpani seated in the body of the orchestra. It is a measure of the flexibility of the current LPO that the first half, including the Beethoven concerto, should have been given in such stylistically aware readings – the modern symphony orchestra assimilating the ‘lessons’ of period-instrument performance.

With every repeat observed (including the second half of the first movement) the symphony ran to almost 40 minutes, but such was the vivacity of the music-making that it was not a moment too long. This was an intensely dramatic reading from the first almost-shocking eruptions of the brass and timpani in the Adagio introduction to the flying Presto with which the work concludes. The opera-house never seemed far away. Contrapuntal detail emerged clean as a whistle. Especially successful was the Andante’s forward-moving tempo, perfectly judged. Beecham might have had a word or two about the performance-style but, given his dictum of maximum delicacy combined with maximum virility, he would surely have approved of the end result.

Much the same characteristics informed the Beethoven concerto played by more or less the same forces. This was a gloriously lithe and unfussy reading, propulsive, richly detailed and, from Maurizio Pollini, playing of a diamond-like precision and glitter. He opted for the lesser-performed of Beethoven’s two cadenzas for the first movement. Despite one very minor glitch in the finale, after Orpheus had tamed the slow movement’s savage orchestral beasts, this was a quite uncommonly well-integrated performance between soloist and conductor. 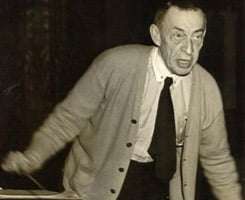 Rachmaninov’s Symphonic Dances is fast becoming something of a party-piece for Jurowski and the LPO – they have already recorded it very successfully – but this was even better. There is a hair-trigger vigour to this music allied to an aching melancholy, especially in the first movement’s saxophone solo and in the second movement’s macabre waltz. What was wholly remarkable was the sheer panache and sophistication with which the LPO played this tricky score, not least in the depth of string tone produced – the violins’ reprise of the waltz was positively voluptuous. Jurowski seated the double basses with half the section pointing outwards, and this worked well, adding further depth to the string sound. This was an orchestra on fire. If Jurowski and the LPO go on producing concerts this good we are in for a white-knuckle ride.