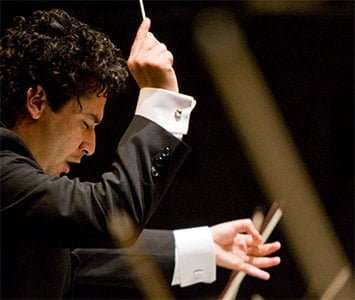 So, London gets to see young Colombian conductor Andrés Orozco-Estrada who, just announced, is principal guest conductor designate of the London Philharmonic Orchestra. This was his Royal Festival Hall debut – it may even have been his London debut (his website only goes as far back as 2012), even though he has conducted the LSO on the continent and first conducted the LPO in Germany last November, with an additional concert in Brighton. Indeed, the repertoire for the German tour encompassed all the works on this programme and these exact works were presented, with Rudolf Buchbinder, at Berlin’s Philharmonie on 21 November. There is no doubting his rapport with the LPO, nor his enthusiasm on the podium. A bundle of energy, he exudes a bonhomie that suggests he is happy to be here, and that in itself engenders a direct rapport with the audience. The enthusiastic reception, particularly to the Dvořák, suggests that every member of the (sadly, not too large) audience will remember Orozco-Estrada’s Royal Festival Hall debut, and be hankering for more from him.

With modest forces (just six double basses for the whole performance), Orozco-Estrada has an eye (or more exactly, ear) for timbre and detail. Clarinettist Thomas Watmough and co-principal horn David Pyatt led the superb contributions in the Kodály – complete with a spatter of applause at the false ending – as Orozco-Estrada led a fluid account of the Dances, which gradually increase in speed. 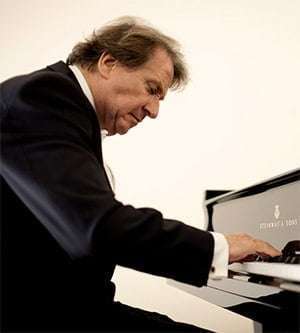 Continuing the musical nationalist theme we had Grieg’s Piano Concerto. Orozco-Estrada took the LPO into accompanying mode, so the performance was old-fashioned in that respect. As mentioned, he’s worked with Rudolf Buchbinder before but the dynamic was very much ‘soloist’ and ‘conductor’ – no real sense of a partnership. Buchbinder was impressively exact in the thundering passages but the first movement began to have too much of a stop-and-start feel to it. Only in the opening pages of the slow movement did there seem to be any rapport with the orchestra – with some exquisite feather-like touches to his playing, but even then his quiet touch vacated Buchbinder, and the piano became again too brittle and strident.

The Dvořák restored confidence. Orozco-Estrada obviously knows it well (his score was well-thumbed), and it is fantastic music. In this particularly dark-hued Symphony it is the cellos that lead and Orozco-Estrada was alive to the brooding nature that underpins much of the music – although he can equally well bring out the warmth in Dvořák’s music. The LPO has a long-standing affinity with this work – there are memorable recordings under Charles Mackerras and Carlo Maria Giulini – and Orozco-Estrada’s reading, rich and satisfying, can happily be counted in similar vein. An excellent way to start what will hopefully be a long collaboration.

As it happens, Orozco-Estrada is not listed for any concerts in next season’s London Philharmonic programme at the Royal Festival Hall, and he officially takes up his principal guest role in 2015, but if you want to see him in London before that put 3 March in your diary, when he brings the Tonkünstler Orchestra Niederösterreich to Cadogan Hall. The opening work is, again, Dances of Galánta, followed by Rachmaninov’s First Piano Concerto with Barry Douglas, and finally Beethoven’s ‘Pastoral’ Symphony.