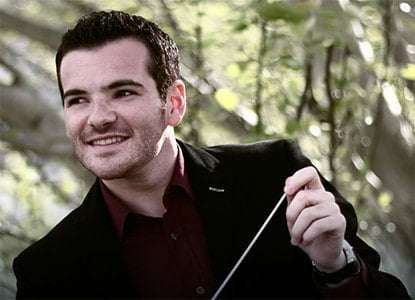 Aged 27, Lionel Bringuier’s star has risen with such speed that he will take up the prestigious post of Chief Conductor of the Zurich Tonhalle Orchestra later this year. Commensurate with this advancement, his conducting certainly demonstrated considerable accomplishment and confidence in this concert of contrasting genres and styles. All the works here require a notable degree of concentration, certainly in the case of the three French works of the second half, which each unfold as a continuous stretch of music.

With those challenges ahead, Bringuier perhaps forged a little too homogenous a unity across the movements of Beethoven’s Symphony No.4. In this, a conductor can afford to point up the differences with some zest. In Bringuier’s performance the ticking clock which opens the Adagio second movement set a comfortable pace, maintaining tension. But there would have been no harm in allowing the BBC Symphony Orchestra to wallow a little more, especially given Richard Hosford’s yearning clarinet solo. The following scherzo was hasty enough, though without detriment to nuances, off-beat accents and syncopations, but the twice-recurring trio section might have offered lighter relief. So too the scurrying semiquavers of the finale could have been a touch more fleet-footed, particularly with the more hefty, developmental passages, which were brought across well. This is a comparatively minor criticism though, as Bringuier’s rapport with Beethoven’s idiom was otherwise well realised, with his liveliness fully communicated to the orchestra. Undoubtedly Bringuier captured the sense that “the movements fit in their places like the limbs and features of a lovely statue … all is subordinated to conciseness, grace and beauty”, as George Grove observed.

The spirit of Ravel was threaded through the second half of the concert. Initially that was deliberate. In Ravel à son âme (2011) Gérard Pesson imagines how the earlier French composer might have communed with his soul in a five-minute orchestral piece. “Residual signs” are a guiding principle of Pesson’s compositional technique, and the inspiration for the work was Ravel’s song ‘Ronsard à son âme’. There are further references, to ‘Der Abschied’ from Mahler’s Das Lied von der Erde, and hints of transience are offered by the interludes from the violins playing col legno and the evocations of birdcalls. Bringuier and the BBCSO sustained a compellingly ethereal backdrop to these.

Whether intentionally or not, Marc-André Dalbavie’s Flute Concerto (2006) seems to allude to Ravel’s Piano Concerto in G with its violent orchestral snap at the start, setting the soloist off on an energetic course. However, these pistol-shots punctuate the continuous dialogue between flute and orchestra, which could perhaps have been delineated a little more incisively so as to clarify the structure. Clearly, though, Bringuier held back for the most violent snap at the end, to bring the work to its peremptory conclusion. The apparently autonomous agility of Michael Cox’s playing skilfully belied the fact that the flute part is closely dovetailed to the orchestra’s role, the two forces working in tandem constructively. This carries through to the slower middle section, where the heterophonic texture of the soloist’s fusion with the orchestral lines at that stage recalled Britten’s Curlew River. Elsewhere, there was a certain doom-laden intensity that evoked Lutosławski, though the transparency of much of the scoring surely betrays the influence of Dutilleux too.

Ravel spoke in his own music by way of the Boléro – its solo flute opening fortuitously leading on neatly from the Concerto. Bringuier built up a steadily imperceptible crescendo, ending with a devastating conclusion. Along the way was a magical appearance of the melody with horn and celesta in duet, an ease and gracefulness to the violins’ playing when they took up the tune, and a bright, steely edge to the mêlée when the trumpets entered. It would be no exaggeration to say that this was a virtually authentic ‘French’ performance in the way that the melody remained precise in rhythm and tempo, but vitalised with a humane, even sensual, quality in sonority and texture so that in no sense could this account be regarded as mechanical.