Even the greatest of composers are allowed the occasional misfire, while still remaining themselves. Schumann was inspired by Schiller’s play The Bride of Messina (“… incestuous passion and catastrophic revenge…”) and contemplated making an operatic version. He wrote only this “theatre overture”, not an especially inspired work, somewhat earnest, but with numerous felicities and tender entreaties, all poetically expressed here, not least by clarinettist Nicholas Carpenter.

Beethoven’s ‘Triple Concerto’ might seem an expensive folly to promote in relation to its musical rewards for all that it has a certain jauntiness, pleasing tunes and a meaningful slow movement. This was an uneven performance of an uneven composition. One might question Lars Vogt sitting with his back to the string soloists when it would have been possible to have them positioned for three-way eye-contact. Nevertheless, music is for listening to, and what we got was an urgent unfolding of the orchestral introduction, leavened with reverential hush, and an ad hoc piano trio that never quite gelled, Baiba Skride and 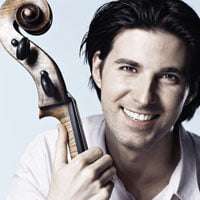 Daniel Müller-Schott forming a duo of their own, and not just visually, she engagingly conversational, he lacking warmth of tone and with a tendency to unkemptness, although eloquent in the Largo. Eschenbach and the LPO were attentive accompanists throughout, although the reading never quite unified, and monotony set it, the tempo for the finale’s polonaise not stately enough for this dance and leaving little room for later scintillation. Vogt stood out though, playing with a range of dynamics and attacks that always demanded attention and proved persuasive; not surprisingly he observed Beethoven’s sustaining-pedal markings in the closing bars (always a striking moment) and he joins a select club by so doing.

The masterpiece of the evening was Schumann’s Second Symphony. His four symphonies (really five, there are two versions of the Fourth) have tended to be a staple of the gramophone rather than the concert-hall, yet each is an endearing and enduring gem. Fewer performances than say Brahms’s foursome is no indication of the greatness of the music.

The Second Symphony is altogether singular and was here conducted and played in a complementary manner. Eschenbach caressed the slow introduction (difficult to start, but a simple gesture and secure playing ensured all was well) while ensuring direction and an elegant transition into a fiery if flexible Allegro, dramatically banked and vividly detailed (with no suggestion of the bogus claims that Schumann couldn’t orchestrate). Throughout, the use of antiphonal violins was displayed as de rigueur. The middle movements offer maximum contrast, a scurrying scherzo requiring nimble playing (the LPO’s strings unfazed by its tricky turns), leavened by two trios, one springy, the other yielding, and a sublime slow movement, rapt, secretive, unfolded spaciously by Eschenbach over a glorious proto-Tristan thirteen minutes and played with a beauty and a sensitivity that transported us to a very special place, before giving way to a finale at once purposeful and articulate en route to the triumphant apotheosis.

Eschenbach and the LPO clearly had had time to look into this great work and present it with due care and attention, as well as fire, poetry and conviction – this is not music to throw on at a moment’s notice – and the result was a fully-formed and compelling account of an always-fresh and stirring symphony.