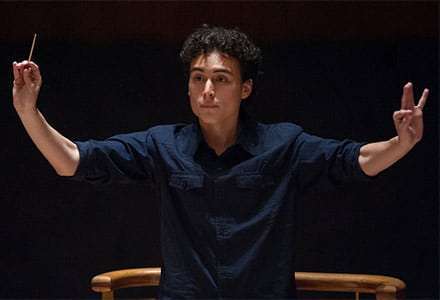 It would be easy to report that 20-year-old Ilyich Rivas has a great future, save this concert more than suggested that he’s already having it. From the ranks of El Sistema, and both balletic and angular in conducting style, here making his Royal Festival Hall and London Philharmonic Orchestra debuts, effectively his first appearance in the capital, the Venezuelan led this attractive mix of pieces with confidence, visual enthusiasm and interpretative individuality.

Dvořák’s Scherzo capriccioso was given with Slavonic exuberance, a contrasting lilt and vivid detailing (clarinets ‘bells up’ at one point!). Despite its title the work is tinged with sadness, due to the death of the composer’s mother, not least in the trio, inspiring a plaintive tune for cor anglais, sensitively played by Sue Böhling; and full marks to Rivas for playing its repeat, for Dvořák carefully calculates its return and who wouldn’t want to hear this melancholy melody again. Overall, this was a reading of fire and seduction.

Mahler and Shostakovich occupied the concert’s second half. The former ultimately thought that Blumine was best divorced from his First Symphony, so too the ‘Titan’ nickname. Surprisingly, given he did without copy for both the Dvořák and the Shostakovich, Rivas needed the score. That’s by the by, for this short essay wafted in on a magic-carpet of sound, Paul Beniston’s silver-tongued trumpet solo the epitome of eloquence as part of a fragrantly realised rendition. 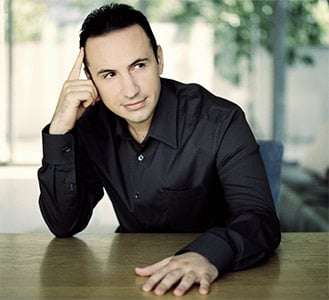 The last time the LPO played Shostakovich’s First Symphony (at least in London) was in October 2012 with a conductor at the opposite end of the generation scale, Stanislaw Skrowaczewski (due back with this orchestra in a few days’ time, the 14th). 70 years Rivas’s senior, the Polish maestro found greater daring and irreverence than did the Venezuelan. From Rivas, we were given a taut appreciation of the work, lacking an essential flippancy, a ‘symphony with subversive tendencies’, no more, tightly controlled but clipping the music’s wings somewhat. Shostakovich was 19 when he completed the work in 1925. At a similar age, Rivas was more drawn to the score’s brooding loneliness (slow movement) and emotional sear (finale), for the sleights of hand of the first two movements were kept a little too much in check, assertively conducted and impressively played as they were. Solo work was notable, too, not least from oboist Ian Hardwick and cellist Kristina Blaumane, and Simon Carrington’s contribution on timpani, as throughout, covered a wide range of complements and interventions.

Earlier, Rivas and the LPO had offered an exemplary partnership for Simon Trpčeski, who brought much freshness to familiar Tchaikovsky. In a sense Trpčeski kept himself to himself, trusting of his accompanists, integrated with the orchestra, dropping back when needed, and never over-forcing even in the most demonstrative passages. Indeed it was Trpčeski’s fantasy and delicacy that compelled the listener, a lightness of touch and a non-percussive way with fortissmos that spoke of true musical artistry and which illuminated persuasively the solo part’s potential for discretion. Hugs all round! As an encore, Trpčeski offered a charming folksong-like miniature.