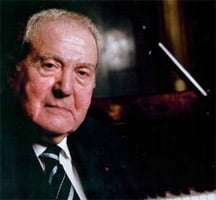 Whatever Aldo Ciccolini is on, I want some! The Naples-born French-citizen pianist is a just a few months away from his 84th-birthday (on 15 August) – and therefore a little older than the 80 stated in the biography that appeared in the London Philharmonic’s programme-book. His appearances in London are few. His most-recent was at Wigmore Hall in 2005 (during his 80th-birthday year) and he had previously been absent from the capital for many years (if keeping in contact through recordings).

Here playing Rachmaninov’s Second Piano Concerto, a few incidental smudges aside, Ciccolini gave us an exceptionally musical performance, wonderfully cohesive and without tricks. If there were few revelations, as such, Ciccolini’s power was to gives us an unaffected account of well-worn music that was illuminated from within and sounded fresh, spontaneous and heartfelt, the more-athletic writing brought off with clarity and glitter. Ciccolini possesses the ability to do nothing for the sake of it, yet has an indefinable individuality of sound, touch and phrase that brings newness to whatever he plays. Although Ciccolini lacks for nothing in terms of dexterity and capacity, it was his soulful and spacious delivery of the slower music that captivated the most, time-taken enough to suggest a ‘fond farewell’ (hopefully not) yet with an integrity that never lost the overall plot or became mawkish.

Yannick Nézet-Séguin and the LPO offered an attentive and tactful accompaniment with some fine solos (John Ryan on horn and Lorna Maghee on flute, for example, both guest principals) that was miscalculated in being too loud and dominating on occasions when the pianist was part of the tutti.

A goodly number in the audience stood to applaud Ciccolini’s performance (a standing ovation that was, for once, justified). The encore Ciccolini offered eluded your reviewer; it was certainly played with rapt sensitivity and may have been by Liszt, which would have been appropriate given that Ciccolini’s shoulder-length white hair makes him an uncanny ‘dead ringer’ for the Abbé! Hopefully, this was not another ‘brief encounter’ with Ciccolini for London audiences and that he and the LPO’s management are checking dates for a return (although at least this performance was recorded and hopefully is destined for LPO Live). That Ciccolini is close to 84 is a statistic; that he remains a great musician and pianist is a fact.

Of the book-ending symphonies, the ‘Italian’ was not particularly engaging, the first movement harried along (the exposition repeat and thus Mendelssohn’s carefully crafted lead-back bars excised in a manner that suggested impatience), violins sounding somewhat thin, the finale rattled through and missing point along the way. If the middle movements were more shapely and suggestive, they also dragged somewhat and were too ‘designer’. Although much attention was paid to dynamic variety, it all seemed rather self-consciously achieved.

No such affectation distracted in Dvořák’s Seventh Symphony (arguably his greatest, until you hear one of the others!). Yannick Nézet-Séguin probed the music’s dark side, conjuring an epic account, allowing the work its own space (the conductor had rather imposed on Mendelssohn, as ‘natural’ a composer as anyone) and brought out its emotional depths and yearning intensity, the LPO at its scintillating and expressive best. Just occasionally the woodwinds lost out in the balance (such a shame with this particular composer) and, for all Nézet-Séguin’s hyperactivity, nothing was taken for granted or easily achieved. Indeed, although there was no lack of lilt and sunlight, there is also a tragic air to this music that was uncompromisingly brought out, not least in the closing bars, which here seemed to suggest that the “majestic affirmation in D major” is anything but.