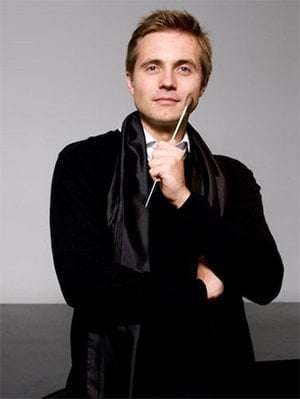 Vasily Petrenko has conducted Elgar’s First Symphony in Liverpool and with the LSO (the latter time replacing Colin Davis) to impressive effect. Whether the Second (1911) was new to him at this concert I know not, but if so then doing it first with the London Philharmonic holds a great advantage given its long association with Elgar’s music, with such conductors as Barenboim, Boult, Elder, Handley, Slatkin, Solti and Thomson.

Intriguing and compelling as Petrenko’s approach to this musically and emotionally complex masterpiece is at present, it is an interpretation in the making rather than a fully-formed one. Taking exactly one hour overall, Petrenko brought an expansive slant, the opening movement more a noble, even burdened and reluctant, release than an impulsive coiled spring, the slower episodes reflected in tranquillity. But Petrenko didn’t lose the musical threads let alone the argument, for the articulation lengthened naturally, if daringly. Somehow, we were all with the conductor, as was the LPO, for the flexibility breathed as one. That said, such elegiac lingering does rather steal the thunder of the second-movement oration for the then recently late King Edward VII, here particularly funereal in its tread, an eloquent inward processional ranging from awed hush to rising collective passion, the LPO’s strings imposing in their deep tone and Gareth Hulse’s oboe soliloquy wonderfully expressive.

In a performance less impetuous than it was contemplative – more to Barbirolli than to Boult, and with reminders that Petrenko was following in Russian Elgarian footsteps such as those of Rozhdestvensky, Svetlanov and Temirkanov – the LPO was well prepared, with just the occasional feature uncertain, but with impressive unanimity, not least in the scherzo, which although somewhat under-tempo (in itself not important) was not spectral or shadowy enough, safe, and rather inhibited in the nightmarish outburst of the central section, and the increase of speed in the coda sounded more showy than organic. With the finale, Petrenko’s again-broad tempo felt a little stilted at times, although he certainly embraced the music’s resignation, sear and pomp, the final dying-ember pages the equivalent of a faded photograph, the end of an era, poignantly brought to silence. Much to impress and illuminate, then, for Vasily Petrenko is clearly a very sympathetic and personal Elgarian.

The sorrow embedded in this Symphony, something which Petrenko highlighted, was in-keeping with remembering Brian Hart, the LPO’s Transport Manager. He died suddenly on 5 January at the age of 49. Tributes to Mr Hart in the programme included those from Stewart McIlwham, representing the LPO, and from Lennox Mackenzie of the LSO, the deceased’s former employer.

The first half of the concert included a very enjoyable outing for Rachmaninov’s Paganini Rhapsody. Kirill Gerstein was the suitably capricious soloist, bringing both bravura and charisma to the piano part. His individual and spontaneous contribution wasn’t always mirrored by an LPO that played with a straight if century-seeking bat – a bespoke pianist with an off-the-peg if top-branded orchestra, but the whole was precisely detailed and well-balanced. Kicking the evening off was Berlioz’s dashing Le Corsaire in which Petrenko did not spare the horses. Although his tempo contrasts were exaggerated, there was much that was sensitive and swaggering, and the romping final bars were exhilarating.