Britten
Paul Bunyan – operetta in a Prologue and Two Acts to a libretto by W. H. Auden [performed in English and with word projection] 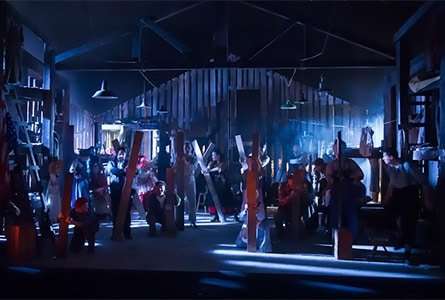 For its present run, English Touring Opera has selected some interesting rarities from the British repertoire with Britten’s Paul Bunyan standing alongside Tippett’s King Priam. Both treat foundational national legends in very different ways, the former intriguingly so as W. H. Auden’s libretto draws on the stories about Bunyan, the giant lumberjack, demonstrating that even a relatively young nation like America has felt the need to create for itself a mythical past.

As often with sagas and legends, this one has a quasi-religious element, with the notionally once human Bunyan elevated to the status of a tutelary presence or genius. His confessional words at the end of Britten’s operetta, “I am Way, I am Act” surely echo Jesus’s “I am” sayings in St John’s Gospel, particularly “I am the Way, the Truth and the Life.” This seems all the more pointed given the religious identities and experiences of the immigrant lumberjacks are not referred to at all, except that Christmas happens to be celebrated near the end. Accordingly, this production does not attempt to reincarnate Bunyan in human form, but preserves him as an unseen force, embodied in the amplified off-stage voice of Damian Lewis (of Forsyte Saga fame) – at once both friendly and sovereign. 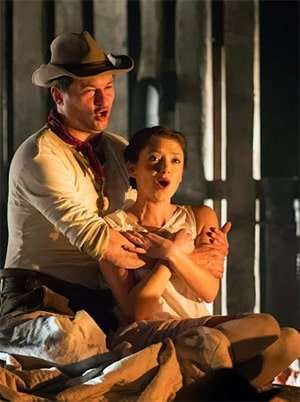 Aside from this, the staging is grounded in history, however generalised (or even fictional) the narrative which the work constructs (and satirises) in justification of the American Dream. It is set in a lumberjack camp, like a giant shack with bunk beds and other amenities bounded by walls of wooden boards. These presumably indicate the raw material of the forests which the community has set out to exploit to destructive and constructive ends. The camp is a microcosm of American society – and by extension all human society – as its individuals seek to satisfy their varied physical and intellectual desires, to assert their own positions and to break out of the confines imposed on them by force of circumstance.

Although Paul Bunyan is not a musically difficult score, it does call for a large number of diverse characters, which is tricky to realise successfully in every last detail. ETO’s cast hit the mark most of the time. The performers certainly enjoy and believe in a score that can easily seem contrived. It is not the fault of Liam Steel and his cast if the drama lacks a little panache and real individual style despite its synthesis of the traditions of Broadway musical, blues and European opera. Philip Sunderland and the orchestra did an excellent job in stitching the composite nature of the score into a coherent, dramatic flow right from the portentous opening. That said, at times the singers tended to treat the music in too much of a serious, operatic style, more brashness and vulgarity would not have been amiss in ‘Gold in the North came the blizzard to say’.

Among the principals, an ideal contrast was established between the sleek suaveness of Ashley Catling as Slim and the naivety and awkwardness of the more reserved Johnny Inkslinger as taken by Mark Wilde, whose rendition of the western-style ballad interludes was seemly and unforced. The two bad cooks Sam and Ben (whom Slim supplants) played by Stuart Haycock and Piotr Lempa, effected a camp disposition, especially in their fit of pique when the lumberjacks dare to ask for something other than soup and beans – Lempa’s performance was particularly amusing given his classically deep East European voice from low in the chest. As Slim’s beloved Tiny, Caryl Hughes was vocally dainty but alluring. Wyn Pencarreg characterised the role of Hel Helson – the lumberjacks’ foreman who attempts to usurp Bunyan’s leadership, but is eventually reconciled – as a mock-Wagnerian villain such as Hagen or Klingsor, while Matt Ward provided some nimble footwork in his two appearances as the Western Union Boy, delivering a telegram each time.

Despite a few caveats, this is all enormously enjoyable, a staging from which ETO can take much kudos. ETO is about to take Paul Bunyan on tour and it is well worth seeing. Not only that, with at least two other productions (by WNO and British Youth Opera) during Britten’s centenary last year, it may be a while before such a chance arises again.