“50 years to the day since the orchestra played its first concert, the London Sinfonietta celebrates its birthday with the music that has shaped its identity – past, present and future. Co-founder David Atherton joins George Benjamin and Vladimir Jurowski in conducting a journey that begins with the music of Stravinsky, Ligeti and Birtwistle, courses through to the London premiere of Hans Abrahamsen’s piano concerto ‘Left, alone’ and peers into the future with a new commission by RPS Music Award-winning composer Samantha Fernando.” [BBC Radio 3 website] 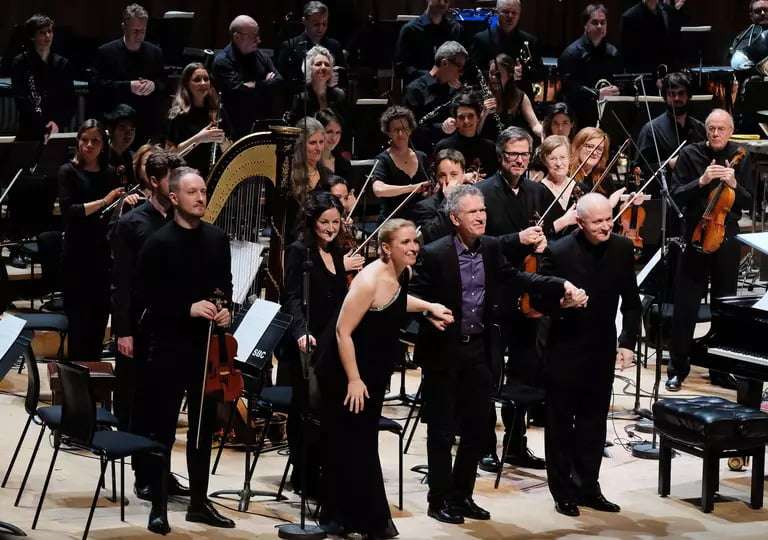 Reviewed from live BBC Radio 3 broadcast… The plans were made, reviewer in place. The flu intervened, and the designated scribe was incapacitated. So, I answered the editor’s cry for help, he was looking for a lifeline, and I was happy to help if unable to get to the Royal Festival Hall, getting to London is difficult for me, so I did the next best thing and tuned-in to BBC Radio 3, although I wasn’t keen on the announcer telling us the same thing several times as if we have no knowledge of our own and in such matter-of-fact tones; and the playing of a recording of Roberto Gerhard’s Libra during the interval – welcome as such, although it could be argued it was too much music given the extent of the concert – was faded out before it finished: an abomination of a misjudgement.

So, what did we get at this long celebratory concert? Harrison Birtwistle’s The Message, intense and jagged trumpet and clarinet lines, formed the first music heard, climbing higher, capped by a side-drum roll, was the first music heard: a good start. Stravinsky’s Octet, for wind instruments, conducted by David Atherton (the Sinfonietta’s co-founder), was finely judged and characterised for its pastoral lyricism, baroque rhythms and decorations, and its tart use of instruments, whether drily humorous, skittish, with some jazzy syncopation and a witty pay-off. György Ligeti’s Chamber Concerto is an amazing piece (also under Atherton), every sound and nuance perfectly imagined, subtle, dynamic, static, fluid, so many colours and sonorities from just thirteen tremendous musicians.

This had been a Sinfonietta retrospective, so far. Now it was the present. We got three world premieres and, for the Abrahamsen, a London one. All good. Deborah Pritchard’s River Above, for alto-saxophone, played superbly by Simon Haram, proved to be intensely lyrical, musing introspectively and with flashes of volatility, while Samantha Fernando’s Formations, conducted by Vladimir Jurowski, of London Philharmonic fame, came across as an attractive tapestry of sound, a painterly world of shadows and suspense, and quixotic thoughts for fifteen players. I hear why George Benjamin was attracted to Hans Abrahamsen’s Left, alone – a concerto for the left-hand – for the Danish composer’s craft is as painstaking as his own. Quite a piece: sonic thunder and lightning, strident, glittering, and with sparseness rising to peaks of intensity and a sense of ritual. This mercurial sonic inventiveness found the Sinfonietta at its largest, swelled by alumni, and the singular Tamara Stefanovich was in absurdly superb form.

Finally Encore!, something stitched together and contributed to by John Woolrich and embracing other contributions from Colin Matthews, Julian Anderson, Morgan Hayes, Martin Butler and numerous others, a sort of concerto for orchestra based on a jaunty Hornpipe by Henry Purcell. For all the diverse collaboration it came across as a single piece, sometimes whimsical and always inventive. Jurowski returned to conduct and the Sinfonietta players were stunning.