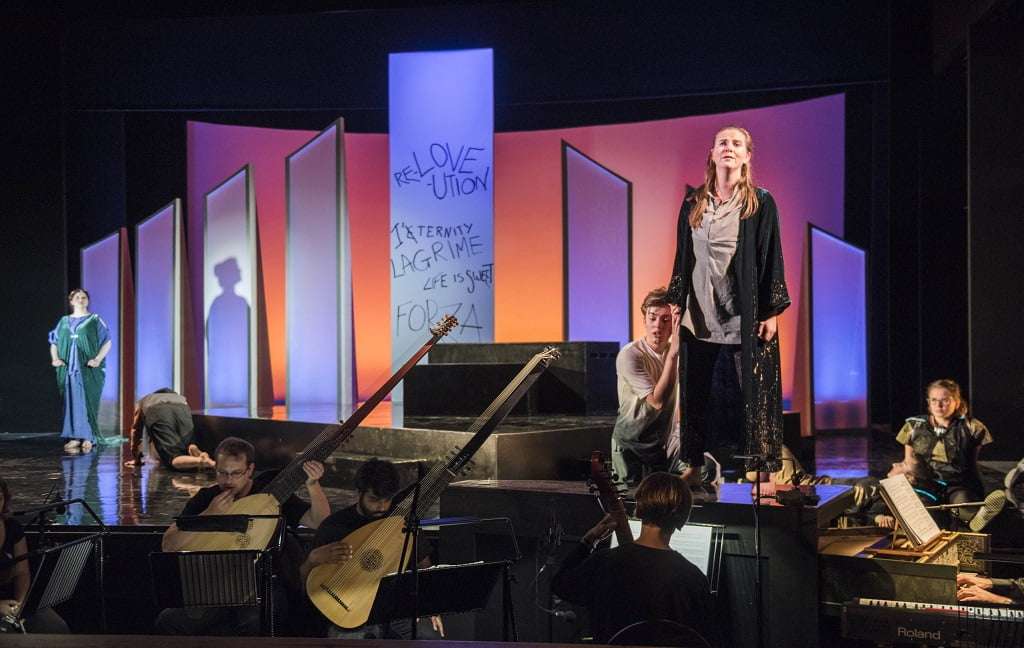 Jenny Miller’s production of Monteverdi’s unflinching portrayal of the amorous and political machinations at the Roman Imperial court of Nero is a rather confused affair with little sense of any particular period and place. The divinities Fortune, Virtue, and eventually, Love rise up from a disconsolate heap of people, spread over the boxes on the stage, to debate which of them is more powerful, in fairly measured, though sonorous, renditions by Anna Cavaliero, Isabella Cheevers, and Chiara Vinci. They resemble street-wise schoolgirls with small glittering backpacks, maintaining a mischievous presence throughout the opera by hovering at the fringes of the action and occasionally interacting with the human characters.

They are also inanely called upon to write down on a board as graffiti various words and phrases which appear important to the director and apparently need to be brought to the attention of an addled audience failing to engage with a cast of other characters who are not much distinguished from each other in their rather anonymous costumes which look more like the drab dress of mediaeval artisans than slick Roman togas. In order, the concepts the audience is invited to contemplate are “love”, which is then added to as “re-love-ution” to make a rather cack-handed anagrammatic pun; “grime” becoming the Italian “lagrime” (tears); and “eternity” becoming “iternity”, doubtless to reflect perceived street patois). 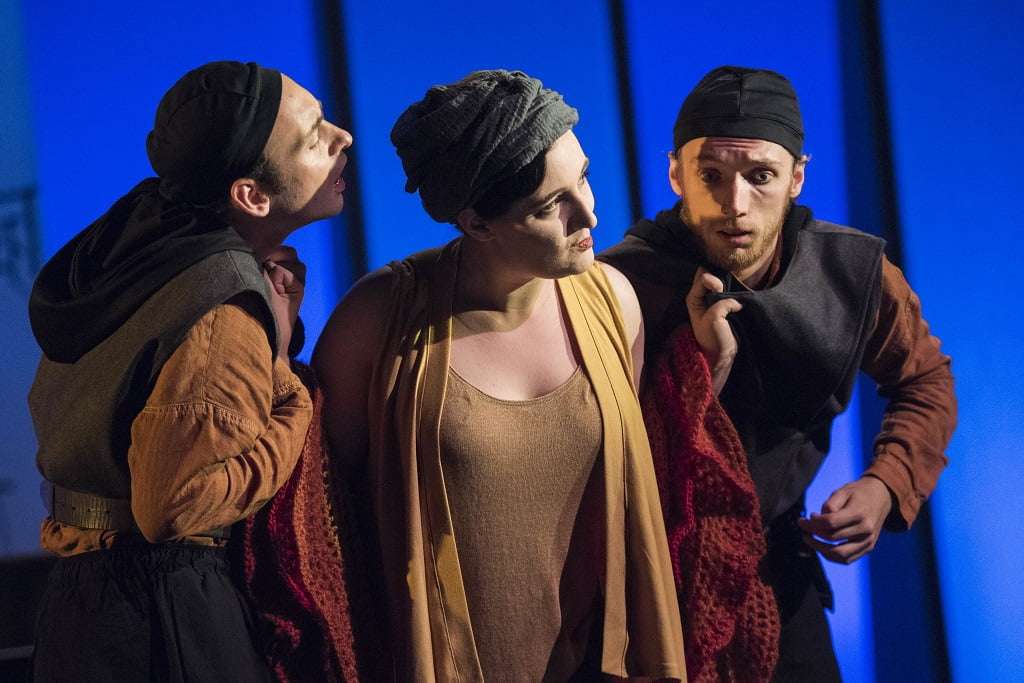 Despite talk of the Roman populace’s oppression and hunger at one point in Busenello’s finely-paced and multifarious libretto, the only revolution that obtains in this production is what seems to be Miller’s lesbianised re-interpretation of the central love interest, as Anna Harvey’s Nerone is not particularly made to look male, and similarly Ottavia’s page, Valetto, is taken by Rosie Lomas without any attempt to suggest a man either, though she acts and sings with correct impish fervour. Curiously, given this interest in fluid sexuality and gender – which is also played up to with Nerone’s erotic flirtation with Laurence Kilsby’s smooth-voiced poet Lucano after the death of Seneca – Miller ignores the explicit opportunity given for a further exploration of those phenomena with the striking Venetian convention of servants taken by male alto singers in drag. Poppea’s nurse, Arnalta, is performed by Beth Taylor in a lively if not particularly raucous manner, thereby removing much of the comedy of the part and excising valuable contrast in Monteverdi’s drama. The part of Ottavia’s nurse, Nutrice, is cut entirely.

The effect of Miller’s modish examination of certain social and psychological facets of the work is to undercut the subtleties and ironies of this masterpiece, one of the first instances of opera not treating an exalted mythological theme. An intelligent interpretation does not require the signposting of its themes in such a facile way, nor the subsequent indication that these extrapolated themes and the characters’ dialogue are merely words and insincere expressions which we should not take literally. Also, by rather downplaying the male role of Seneca – whose needless but courageous death should concentrate our minds on the vanity and selfishness of most of the other characters’ behaviour – much less contrast is effected between important and peripheral matters, and consequently Miller’s interpretation fatally bears little feeling for the spirit of Greek tragedy which artists in the Renaissance period such as Monteverdi sought to revive.

A technically good cast of singers appear to be constrained to give any better musical account of the score than merely proficient. Anna Harvey’s Nerone is crisp and exact though not commanding as an Emperor should be. Sofia Troncoso intermittently brings fervour to the part of Poppea as she sees her chance of social and political elevation, at the expense of Ottavia, who is sung with consistent suffering sympathy by Maria Ostroukhova. Matthew Paine gives a soapy and fey account of Poppea’s cuckolded lover, Ottone, who turns his attentions to the more determined Drusilla of Lucy Knight, singing with attractive vigour and charm, particularly as she defends herself from the accusation of attempting to kill Poppea (based on the fact that Ottone was the real culprit, but disguised by wearing Drusilla’s clothes). 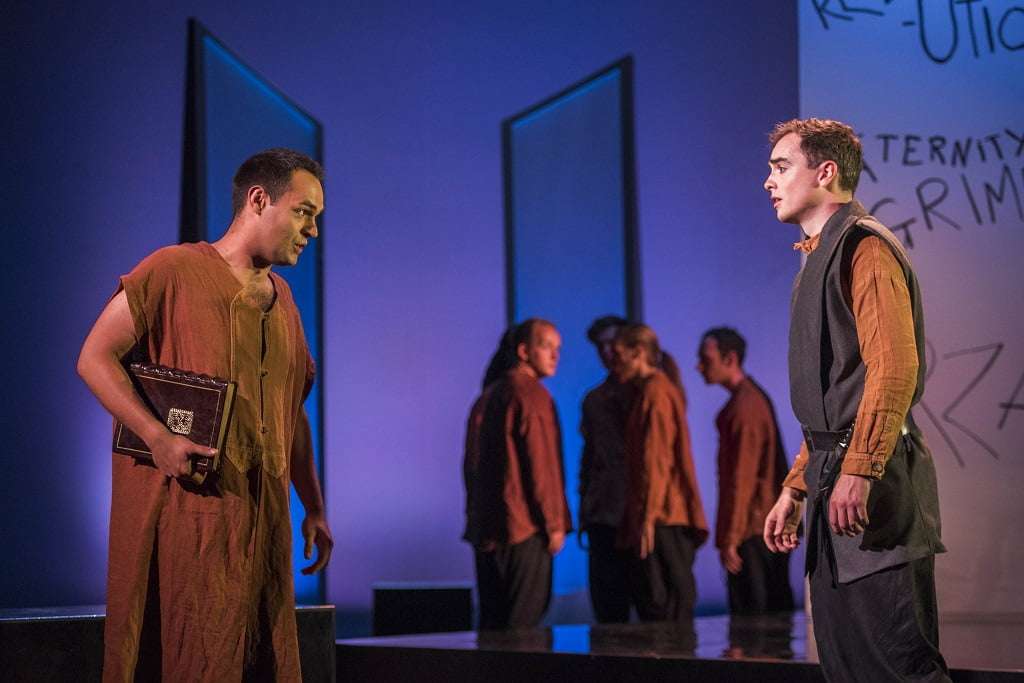 Matthew Buswell’s Seneca is indeed calmly stoic if musically somewhat lacking in tonal depth and force, though quite possibly that owes something to directorial diktat than any lack of willingness on Buswell’s part. His altercations with Nerone could be far more gripping and confrontational, though dramatic tension was probably dissipated by having to halt the performance and bringing the long interval forwards to this point whilst the technical crew fixed electrical problems provoked by a sudden thunderstorm over the Cotswolds.

Fortunately the vitality of Monteverdi’s score remains more or less intact in Jeremy Silver’s reading with the Instruments of Time and Truth. Sometimes the plucked tones of the theorbos are even over-zealous and threaten the balance of the recitatives, but they settled down into more balanced and fluent support. Otherwise the interjections by the other instruments provided poised and graceful little interludes and effusions of musical interest amongst the dialogue. If only the drama as a whole were presented with similar subtlety and finesse, allowing all its elements to speak with the candour it deserves, acknowledging the combined genius of librettist and composer.