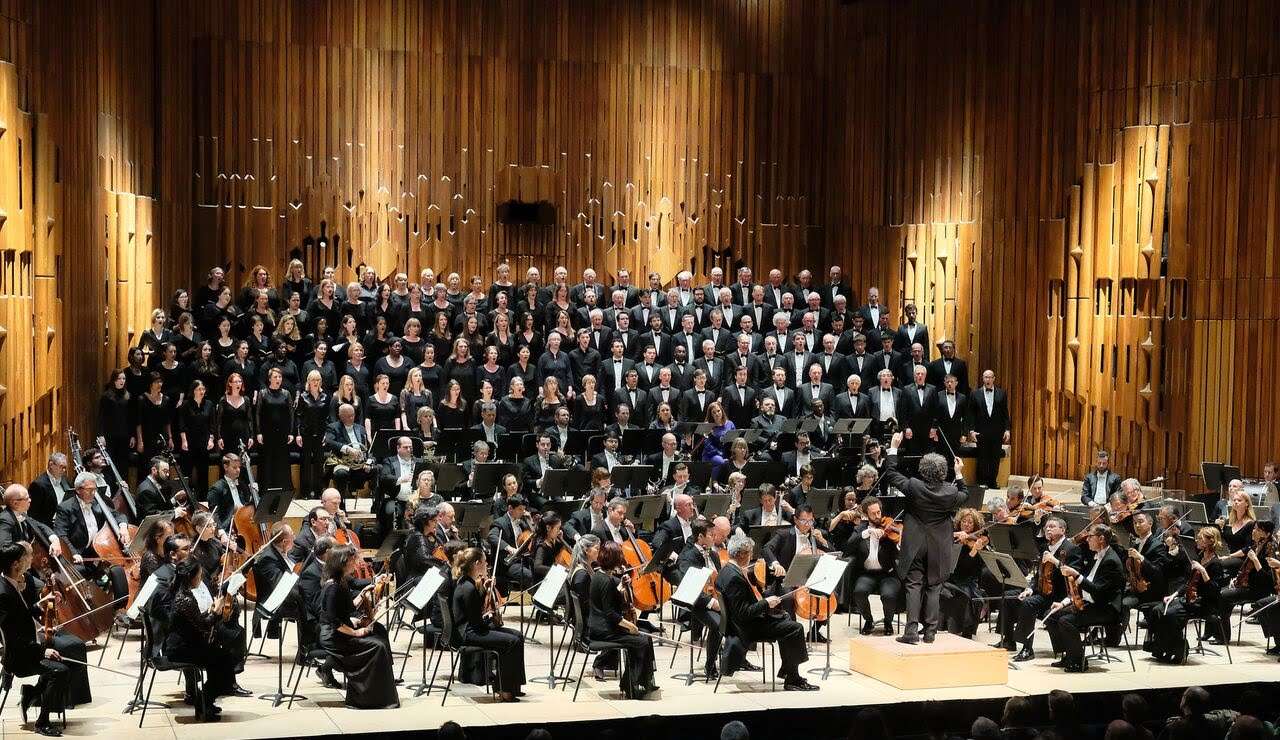 The third and final day of the Los Angeles Philharmonic’s residency at the Barbican Centre represented a triumphant conclusion to a daringly original sequence of musical events. In the morning, Gustavo Dudamel had led an open rehearsal in which his passion for promoting young people in music – and indeed the arts in general – was manifest, comprising members of the Youth Orchestra of Los Angeles and musicians from many British areas, the Youth Orchestra of Great Britain Inspire Orchestra. It therefore was particularly fitting that the evening concert should commence with a piece by Leonard Bernstein whose enthusiastic work as an educator was a feature of his career. Chichester Psalms was preceded by a reading of “Tuning into Change”, a manifesto for the arts written by young people, first presented at the earlier rehearsal.

Chichester Psalms features highly original use of percussion, jagged rhythms and striking tonal contrasts, but it is nevertheless a contemplative work ending gently. The concluding comforting verse (from Psalm 133) translates as “how pleasant it is for brethren to dwell together in unity” and the parallel with Schiller’s words in Beethoven’s ‘Choral’ Symphony makes Bernstein’s Psalms an ideal companion to that masterpiece.

Bernstein exploits colouration to the full; this is orchestral music with voices. That the text should be in the unfamiliar language of Hebrew is a further example of unusual complexion. The choice of countertenor (or a treble, Bernstein’s options) as the principal vocal soloist represents original thinking, creating a varied aural palette. Here the voice did not sound as it does in representations of Baroque style; instead John Holiday brilliantly and with remarkable accuracy expounded his lines passionately. The high-lying part gave the voice a quality very similar to that of a mezzo-soprano and sounded particularly delicate, especially when accompanied by harp; and the solo voices from within the London Symphony Chorus were taken effectively by Victoria Songwei Li, Anne Reilly, Florian Panzieri and William Pedersen.

The power of the LSC and the brilliance of the LA Phil made the pending performance of Beethoven’s ‘Choral’ Symphony an exciting prospect and we were not disappointed. Dudamel, who conducted everything without scores, adopted generally broad speeds and the straightforward character of his interpretation was admirably free of tempo changes; indeed steadiness enhanced the music’s dramatic impact. There were thrilling moments – especially at the recapitulation section of the first movement where there was no holding back of fortissimo timpani. The dark, threatening coda moved grimly to an overwhelmingly powerful close. After such drama, the extended pause before the Scherzo was essential, and was also remarkable – never hurried but driven with force and Joseph Pereira again performed the timpani solos superbly. There was a beautifully phrased Trio at the required much swifter speed but there was also a strange decision – the omission of the Scherzo’s second repeat. This does nothing for the symmetry of the movement yet it is not unknown for these 240 bars to be left out; conductors as Böhm, Furtwängler, Horenstein and Karajan omitted them yet theirs are great accounts. Nevertheless, despite also adopting this uncomfortable pattern, Dudamel approached the same league as that inhabited by those famous names. 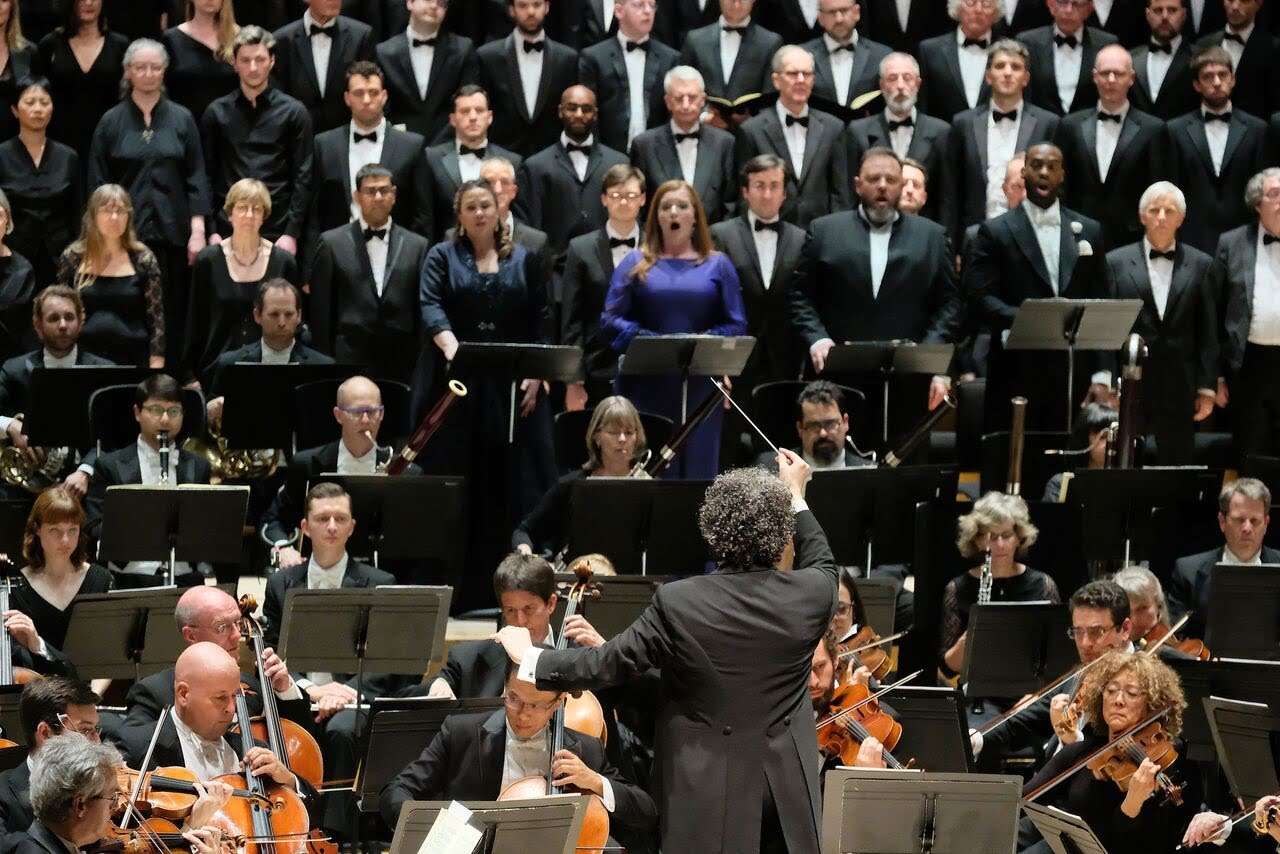 The consistency of tempo, reminiscent of Klemperer at times, continued to enhance the meaningfulness of Beethoven’s creation. The flow of the slow movement, with only minimal distinction between the Adagio and Andante markings, was notable for tonal beauty in the strings and the closing section acquired a moving sadness. The great Finale was effective in every detail; vocal soloists were properly placed in the front row of the chorus and blended sonorously; Soloman Howard sang the declamatory bass solo expressively and with strength (purists will be glad to know that he used the disputed appoggiatura). The lighter quality of Michael’s König’s tenor was admirably clear and he stressed joyful rather than militaristic aspects within the text. There were many moments of flair, one of the most exciting being the way in which Dudamel hurled out the emphatic choral return of the opening verse at great speed and with enormous force. So too the coda: Prestissimo is Beethoven’s tempo and this was as fast as I have ever heard it. From the Los Angeles Philharmonic, detail at this pace was absolutely exact – a breathtaking conclusion.