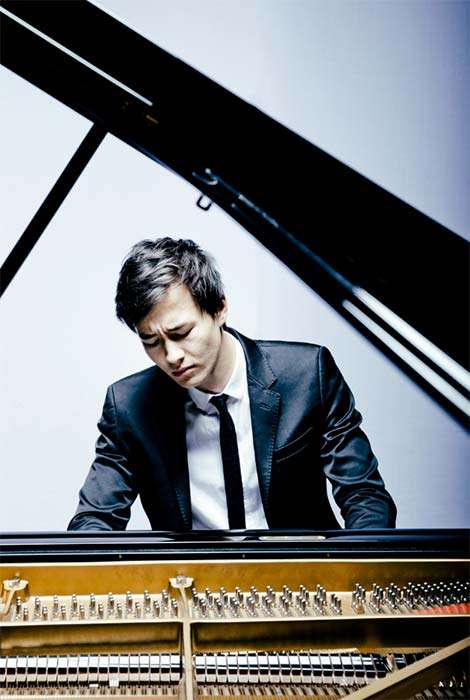 Each time I hear the Chinese-Swiss pianist Louis Schwizgebel, a Leeds prizewinner in 2012 and subsequently nurtured as a BBC New Generation Artist, he never disappoints. Let’s hope that audiences continue to be drawn in as much by his authoritative and stylish playing as by the intelligence and maturity of his interpretations. His playing has bags of personality, but it is not the sort of personality that gets in the way of the music. In a densely populated field, Schwizgebel’s musicianship has special depth and imagination.

Mozart’s Sonata K576, his last, is supposed to be easy, and, paradoxically, Schwizgebel easily proved that it isn’t with playing of strain-free Mozartean finesse. There were many times when his approach suggested Concerto-like grandeur, emphasised by the extra urgency he added to the first-movement repeat, making it sound integral and indispensable. His attention to balance, weight and shape coupled to a propulsive rhythmic energy gave the outer movements sparkle and dash, and his pinball-machine changes of direction were proof of a sharp wit. Schwizgebel’s close contact with the keyboard, crucial to Mozart, produced a beautifully shaded singing tone in the dreamy Adagio, something he would explore further in Schumann’s Kinderszenen.

This adult re-imagining of childhood’s innocent preoccupations can easily sound a bit precious, and Schwizgebel deftly managed the tightrope act of evoking such memories through the filter of experience and nostalgia with impressive and tender objectivity. There was a lightly applied narrative to the sequence, the bookending ‘Von fremden Länden’ and ‘Der Dichter spricht’ hinted at grown-up protectiveness, and his playing of ‘Träumerei’ had the charming, open-ended ambiguity of a child living for the moment.

The second half of Schwizgebel’s Southbank Centre International Piano Series programme was devoted to drama in C-minor. If Beethoven had published his 32 Variations, written in 1806, they would have had an opus number in the late-50s, and Schwizgebel made clear how the music’s character belongs to the earlier bravura of the ‘Pathétique’ and ‘Moonlight’ Sonatas, with a few anticipations of the Diabelli Variations – the rapid, Baroque-style intensification of figuration, a reduction of an already basic them (eight bars of not much more than a descending bass-line) to its proto-components to whet our appetite. There are moments when it sounds like a compendium of Classical technique at its most virtuosic, and in this respect Schwizgebel’s left-hand was like a thing possessed with astonishing drive and accuracy, and for all the work’s brevity – about ten minutes – the work had shape and cohesion.

There was a brief, applause-free silence before Schwizgebel launched into the Beethovenian opening of Schubert’s C-minor Sonata. Of the last three, this one, for me, is the most extreme, a view endorsed by the unrelieved tragedy delivered by Schwizgebel’s uncompromising and great performance. In the first movement, again with the exposition repeat adding immeasurably to the expressive weight, he caught the sheer oddness of the minor/major clashes, which are never resolved, in playing of disturbing ferocity. The hymn-like opening of the Adagio sounds even more like Beethoven, but Schwizgebel guided it inexorably towards a devastating nihilism, a landscape of shadows that neither the fractured Minuet and Trio nor the Finale that just can’t settle did anything to alleviate.

Such an unforgettable rendition hardly required an encore, and the Schubert/Liszt ‘Ständchen’ (from Schwanengesang), suitably inward looking, continued to hover near the precipice.