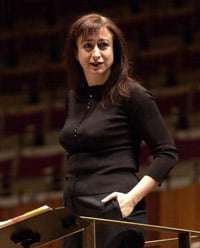 The first half of this Richard Strauss concert juxtaposed two of his autumnal works. Strauss (1864-1949) put all his compositional mastery and his heartache into Metamorphosen (a ‘study for 23 solo strings’) as a musical response to the wartime destruction of the opera houses of Munich and Dresden, and much else besides, the scenes of his earlier triumphs (some notorious). Metamorphosen is a simile for the devastation of German Art. Strauss’s response, an extended slow movement underpinned by the ‘Funeral March’ motif from Beethoven’s ‘Eroica’, is both a defined and ornate musical structure as well as an eloquent outpouring of lament.

This performance, with London Philharmonic players, under Simone Young, baton-less and podium-less (on the shop-floor with the workers, so to speak), didn’t begin auspiciously with coughs and latecomers intruding and, throughout the concert, a creaking seat very close to me. (Could SBC’s Maintenance Department please attend to Stalls, M 15-16, somewhere around that area.) For those who like to watch their music, Young’s very animated conducting style might be diverting, but her ‘dispensing the influence’ during Metamorphosen was at odds with the deep-seated core of the music, which was hardly touched upon here – with dynamics rarely below mezzo-forte and a lack of colour in the playing. Furthermore, for all his eloquence, leader Boris Garlitsky tended to dominate in concerto-fashion, which a lack of clarity in the ‘accompanying’ texture underlined. Although Strauss’s intricate counterpoint was weaved expertly enough, the lack of differentiation over 30 minutes or so became wearing and a diminishing return.

A similar feeling undermined Also sprach Zarathustra (an excess of Strauss’s earlier years). Young’s use of antiphonal violins and her placing of (note) ten double basses to the left is just what the composer expected, and there’s no doubting she elicits good and detailed playing; yet there’s an efficiency, even brusqueness, to her conducting which glossed over possibilities. The opening sunrise was perfunctory (the electronic organ no substitute for the real thing), transitions were square rather than rounded, ‘Of Science’ became ‘Pure Thinking’ (except for those members of the audience who coughed through it with no thought at all), the Viennese Waltz was curt (with Garlitsky to the fore again), little hesitations amounting to no more than mannerism, and the ‘Midnight Bell’ lacked clamour. Beneath the podium activity and vivid playing there was much ordinariness.

How different was “Four Last Songs”. Young is a fine accompanist and was not only very accommodating of Anne Schwanewilms (replacing the ill Nina Stemme) but was able to conjure more variegation, dynamic range and shape than in the other works. Schwanewilms was a wonderful choice of replacement. She is a very experienced (and eminent) Straussian and sung with a relish of the words (impeccable enunciation) and the rapturous music that Strauss composed as his ‘farewell’ (actually there are five songs). With dignity and restraint, and masterly legato, Schwanewilms, with Young, sustained spacious tempos to mesmerising effect and a glorious sunset without ever indulging in histrionics. The third song, ‘Beim Schlafengehen’ (On Going to Sleep), was brought off with rapt dedication, Garlitsky’s solo a thing of wonder – but, then, this was a performance of one’s dreams.