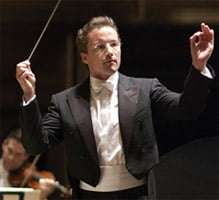 This concert, devoted to Mahler’s ‘Resurrection’ Symphony, concluded the annual visit to Carnegie Hall of The Cleveland Orchestra and its music director, Franz Welser-Möst. (The two previous evenings had featured works by Mozart, Tchaikovsky, Debussy, Beethoven, and John Adams, as well as the New York premiere of Matthias Pintscher’s Five Orchestral Pieces.)

The Clevelanders were in fine form for the Mahler Second, as were the vocal soloists, Swedish-born Malin Hartelius and Argentinean Bernarda Fink, both of whom performed in this symphony in Cleveland a week earlier and are accompanying the orchestra on tour in Europe. The orchestra is not taking the Cleveland Orchestra Chorus on tour, however, instead performing with local choral groups in the cities it visits. The Westminster Symphonic Choir was the chœur du jour in New York.

Welser-Möst’s approach to the Mahler ‘Resurrection’ seemed to come more from the head than from the heart, focusing on managing the huge forces at hand to realise Mahler’s complex musical scheme rather than simply being swept up emotionally moment-by-moment. The performance was by no means dry, however, but the symphony’s emotional aspects were generally kept under control until allowed to burst out in the appropriate passages, when they had a powerful impact. The outstanding talents of the musicians brought Mahler’s score to life, as the Clevelanders responded unerringly to Welser-Möst’s precise and steady baton strokes. The orchestra’s accurate playing was powerful in the opening movement, delicate in the second-movement Ländler, genial and raucous in the scherzo, and inspiring as the soloists and chorus sang texts that addressed the symphony’s eponymous theme of resurrection.

Welser-Möst’s judicious tempos and careful attention to detail served the music quite well, yielding rewards throughout the course of the symphony. The low strings – and especially the double basses, with their powerful entrances and rumbling ostinatos – provided much of the glue that held the opening movement together, subsuming its funeral march characteristics into a more complex whole that anticipated the theme of resurrection that was to come in the finale. There were many fine individual contributions here, especially from the cor anglais, bass clarinet, flute and harp. At the end of the first movement, Welser-Möst observed a distinct pause – but one of a little over a minute and a half, not the five minutes that Mahler called for. This was a practical compromise given the impatience of today’s audiences, although on this occasion there really was not too much coughing or fidgeting, and the audience later observed a long and respectful silence at the symphony’s end.

The second and third movements were regarded by Mahler as being in the nature of an interlude, and they seemed so on this occasion. In the Andante, Welser-Möst gave the Ländler a real pulse, with the strings playing quite nicely as the music picked up speed, and the cellos singing out when the initial tempo returned. The pizzicato section later in the movement didn’t start propitiously, but once it got going, aided by piccolo and harps, it became very effective. The scherzo, based on ‘Des Antonius von Padua Fischpredigt’ (St Anthony of Padua’s Sermon to the Fish) a song from Mahler’s “Des Knaben Wunderhorn”, also began with a pulsing rhythm, provided by timpani, bass drum, rute and lower strings. But although this movement had some lovely moments – particularly the rollicking solos for E-flat clarinet and the lilting trumpet solo with three more trumpets in accompaniment – it never did fully realise the humour of the song.

Bernarda Fink’s performance of ‘Urlicht’ (Primal Light) – another ”Wunderhorn” song – was outstanding, beginning with her sudden, breathtakingly soft, yet crystal clear, entrance, after which the hymn-like brass choir created quite a glorious effect. Fink’s diction and phrasing consistently shaped the words of the text appropriately to their meaning as her voice soared magnificently over the orchestra. She conveyed a real sense of urgency at “Ich bin von Gott”, and then, to an accompaniment led by two solo violins and two harps, gradually released the tension as the movement drew to an end.

In the final ‘Resurrection’ movement, Welser-Möst unleashed the full power of the orchestra, first as the dissonant fff opening chord shattered the tranquillity with which ‘Urlicht’ had ended, and later with a pair of equally shattering percussion crescendos. He skilfully managed the lengthy orchestral section of the movement, which developed thematic material that prepared the way for texts from Friedrich Klopstock’s poem “Aufersteh’n” (Resurrection) and by Mahler himself. This section included a series of conversations between instruments on the stage and off of it, passages recalling the funereal opening movement, resonant brass and wind chorales, majestic trumpet fanfares, and a military march, all of which were very effective.

Malin Hartelius’s clear and lovely soprano rang out passionately above the chorus with the words of Klopstock’s “Aufersteh’n”, promising resurrection after death. Then, in the Mahler text with which the work concludes, beginning with “O glaube”, the soloists’ respective attacks at those words were particularly striking, and both sang beautifully, more than holding their own against the huge orchestral and choral forces arrayed behind them.

The Westminster Symphonic Choir made a lovely sound, but the singers’ diction was at times less than ideal. Perhaps it was not the best of ideas to perform with a different chorus everywhere the orchestra goes. The Cleveland Orchestra Chorus, which sang this piece twice in Cleveland less than a week earlier would likely have been better rehearsed, but one can sympathise with the need to hold down the costs of touring to a manageable level – undoubtedly the reason the chorus was left at home. Nevertheless, the Westminster choristers brought a sense of high inspiration to the final stanza of Mahler’s text, which was echoed by the huge brass section in the towering final passages.