Tchaikovsky
Piano Concerto No.1 in B flat minor, Op.23
Mahler
Symphony No.1 [including Blumine] 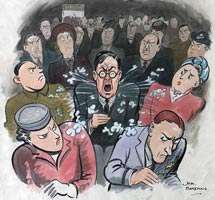 “Coughs and sneezes spread diseases”. A slogan from World War II immortalised by Tony Hancock in “The Blood Donor”. Coughs and sneezes intrude into listening to music, too, as this audience demonstrated all too well – in Surround Sound. The opening of Mahler 1, far from suggesting a new morn and dew on the leaves was cough … sneeze … cough … cough … cough. And the opening few minutes of the Tchaikovsky were peppered with repetitious coughing from a couple of particularly infected sources, inevitably attended to by sweet-wrapper opening. There are people no longer going to concerts because of such intrusiveness. 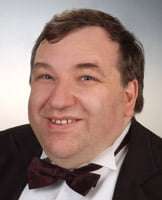 Alexander Markovich initially impressed with his ‘grand manner’ and some of his playing was notably delicate and fantasy-filled. But as the concerto progressed, his palette of touch, colour and dynamics became limited and predictable, with elements of ‘smash and grab’ and a pounding left-hand that could probably cut through bricks karate-style. Whilst his relish for the music was stirring, his ‘roughing it up’ (particularly in the quick section of the second movement, otherwise taken too slowly and rendered archly) was unappealing and unconvincing. With a rather too impromptu accompaniment from the London Philharmonic and Neeme Jårvi – but then Markovich wasn’t really ‘working’ with them either – this was the sort of performance that makes ‘yet another’ account of this war-horse seem like unimaginative programming. But: a bruising performance that makes the music seem hackneyed isn’t the composer’s fault.

As an encore, Markovich offered the very inappropriate ‘Liebestod’ from Wagner’s “Tristan und Isolde”, not in Liszt’s transcription but of the pianist’s own (I am informed), and gave it a melodramatic performance that sold it down the river big time, his body-language suggesting he had finished even though he was still working the pedals. So, the audience just applauded! 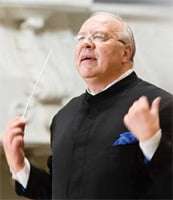 The Mahler was better prepared, quite fresh in conception and likeable. This wasn’t bombastic Mahler, nor was it particularly searching or suggestive, although – in musical terms – the introduction (with well-judged off-stage brass) elided seamlessly with the (repeated) exposition, which was easeful and spring-like, and ended, through no particular upheaval, to the midday blaze of the sun. Such an effect cued ‘Blumine’, which Mahler dropped from his Revised scheme. It’s inclusion here was a highlight, a wafting breeze, subtly played and gently swaying, although one needs to return to Mahler’s first thoughts of the symphony to fully justify playing it.

The scherzo, now the third movement, wasn’t forced, but the trio was toyed with, the return to the scherzo mannered by dint of a long pause. Järvi’s swift tempo for the funeral march was a surprise; quite jaunty, a parody of a parody, but he left too long a gap before introducing the finale – the coughers got there first – and whilst this had power there was little real ‘storm’. It wasn’t until the second quiet part of this movement that a real sense of ‘something happening’ was apparent. The triumphal close was a joyful homecoming, the eight horns standing and joined by an ‘extra’ trumpet and trombone that Mahler seems not to have asked for (one wonders why the ‘additional’ trumpeter from off-stage tried to thread his way through the orchestra as the first movement came to its end even though he had nothing to play for about 40 minutes!).

But it was that sort of evening, smiles at some of Markovich’s ‘punches’, smiles with (or at) Järvi during the Mahler – no matter then that ensemble went awry in Tchaikovsky’s first movement and Mahler’s last – and the conductor’s acceleration in the very final bars of the Mahler may have won the Grand Prix but seemed no more than excitable. It went down well, though.