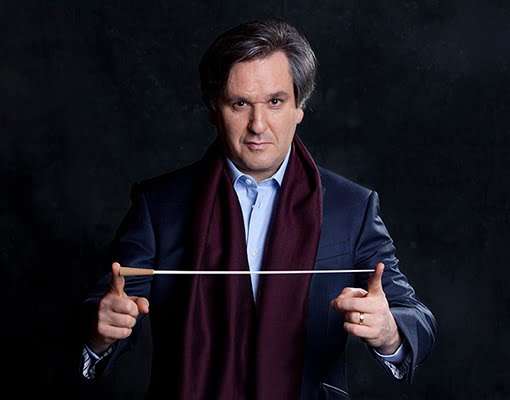 Concerts come in all shades: drab to dazzling, superfluous to special, average to amazing. This LSO evening, streamed live by the Mezzo channel (linked to below), was all of the latter qualities, a 24-carat affair from start to finish. The music-making was of the highest order, a refinement of chamber detail, full-throated thunder, and the widest dynamic range, barely audible phrases allowed time to breathe, speak and cadence.

Antonio Pappano, baton-free, and opting for antiphonal violins, cellos left-centre, double basses ranked far-left, set the tone with a distinguished, organically-felt account of Sibelius’s The Oceanides, memorable for its blended quality, woodwind contribution (flutes especially), and the lingering gravity and catharsis of its D-major anchorage.

Janine Jansen has never been one to fight shy of unfamiliar repertory (think what she’s done for Britten’s Violin Concerto). Bernstein’s five-movement Serenade after Plato’s ‘Symposium’ for violin, strings, harp and percussion, completed in 1954, three years before West Side Story, may have been commissioned by the Koussevitzky Music Foundation, premiered by Isaac Stern, and recorded by Perlman, Kremer, Accardo and Mutter, among others, but it’s never really made its mark in the concert-hall, this side of the Atlantic anyway. 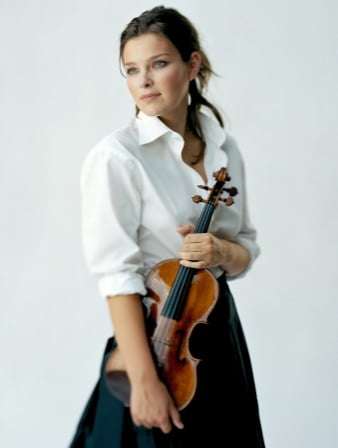 Launching the current season’s LSO Artist Portrait series, Jansen could not have done more for it. She was in aristocratic form, supremely confident, her elegant carriage and moments of wiry huntress pounce communicating as much as her virtuosity and intellect. The murmured solo opening – Phaedrus the Athenian in praise of Eros, god of the heart – grew fabulously out of nothing, sound out of silence (theatrically counterbalancing the eruptive tutti introduction of the Finale). She flirted with the notes, she exchanged with the orchestra (brilliantly so in the violin/cello cadenza of the tender fourth movement), and she floated her harmonics like so many caresses. Every gesture – from stooped concentration to arched neck to intense brow, bowing arm in imperious command – unwrapped the music’s lyric love and lustful passion, now slow, now quick. Honest, heated emotion, not a frill or fancy in sight. With the rampant closing pages she and Pappano let go, synchronised on a complex knife-edge – the whole bacchanalian razzmatazz and exploding climax suggesting as much a thirty-something New York genius drunk on his own brilliance as (in Bernstein’s words) “the natural expression of a contemporary American composer imbued with the spirit of that timeless dinner party” two-and-a-half thousand years ago, Aristophanes and Socrates among the guests. A triumph.

Carl Nielsen’s ‘Inextinguishable’ Symphony, his inexorable First World War hymn to the “elemental Will of Life” exceeded expectations. Negotiating all traps, Pappano hewed a tough, architecturally massive sculpture – motivic, reminiscent, confrontational, affirmation in the face of odds, a Symphony for our time. The Mahler-like succession of ‘Don Juan’-Schubert-‘Alpine’ sunrise-Smetana-‘New World’ allusions running through the whole blazed in crazy, glorious juxtaposition, feeding and offsetting the action. The fairy-hued Poco allegretto took on the character and mischief of a Mendelssohnian wind-band Scherzo meeting tiny pizzicato trolls. The extraordinary timpani battle of the Finale, the two players stationed wide apart, east and west, was a sonic and visual spectacle, the precision attack and spatial onslaught overwhelming.

A scenario somewhere between Janáček and Shostakovich, surpassing both, this was a high-octane, high-decibel, high-drama reading, music – and listener – seized by the throat. But not everything was raw: matching the delicate flutes at the start of The Oceanides, the risk-taking pppp first-clarinet (Andrew Marriner) at the end of Nielsen’s second movement was all that and beyond. The strings throughout were warm and deep-grained, finesse and ensemble retained even in the gutsiest entries. The brass shone in a Brucknerian, Straussian light variously between noon and afterglow. Temperamentally, the LSO has always had this Symphony in its blood (famously with Ole Schmidt and Colin Davis), and backed Pappano to the hilt. His delight was infectious, the plaudits rightly many.