LSO On Track
Musicians from the Guildhall School 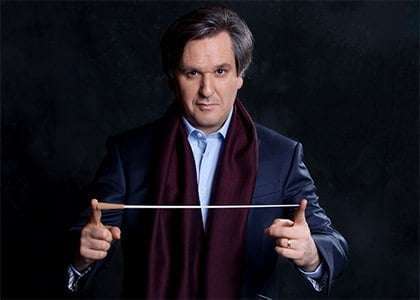 The LSO returned to Sir Peter Maxwell Davies’s Fanfare (2012), an extravagant affair for a battalion of woodwinds, brasses and percussion – written for professionals, students and youngsters of differing abilities. With a packed platform and also an off-stage deployment, the six-minute Her Majesty’s Welcome (written for this very purpose), while ceremonial is also a little curdled harmonically but offered stirring proposals under Sir Antonio Pappano’s encouraging direction. Maybe those deployed far-away lost out to the voluminous sounds from the platform, and perhaps some sectional tuning was questionable, but it was a noble effort from all concerned (and hopefully musically persuasive to those who have yet to make career choices) and good to see ‘Max’, following serious illness, looking hale and hearty in his 80th-birthday year (the date being 8 September). 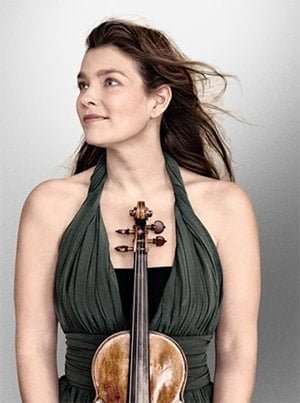 Enter Janine Jansen – a lady in red – for an intense outing for Brahms’s Violin Concerto. Pappano took the lead with an emphatic and pregnant introduction. Sparks flew when Jansen entered, and while her commitment and care was never in doubt, her fierce attacks and expressively tight rendition became cloying and wearing, although her approach worked well enough in Joachim’s cadenza. If the slow movement was beguilingly introduced by LSO woodwinds, not least oboist William Owen (to whom later a bouquet, literally), Jansen continued to pile-on the demonstration – oh for some relaxation, a loosening of the muscles, an aside – and the finale, while full of gypsy fire, offered little respite. Too much pressure for too long, but Jansen’s encore, the ‘Sarabande’ from J. S. Bach’s D minor Partita (BWV1004) was sublime, rapt and soulful; some of that in the Brahms would have been welcome.

It was William Walton’s First Symphony (finally completed in 1935) that stole the show. This great work, and no need to restrict its stature to the British repertoire, has been with the LSO from the off, the incomplete performances that Hamilton Harty conducted before he did the whole work with the BBCSO and then returned to it with the LSO in Decca’s studios. The orchestra’s more recent performances have been strongly associated with André Previn and Colin Davis. Pappano has its passionate measure, too, as this rhythmically precise and gloriously emotional performance showed.

The first movement, whether fist-flailing or poignantly lyrical, was underpinned by symphonic logic, Pappano’s exacting tempos making all of a piece, climaxes remorselessly built towards. The scherzo was speedy, surreptitious and suitably malicious, spat out, contrasted by a slow movement introduced by some exquisite flute-playing from Adam Walker, the music languorous and pacific if erotically charged, Pappano fully into the composer’s declarations of infinite sadness and agony and ecstasy, the LSO focussed and revealing inner lines with tenderness. With the finale (problematical for Walton) its determination blazed and pulsated, timing and dovetailing exemplary, Pappano’s use of antiphonal violins ideally defining the fugal episode, and with no shortage of sensitivity in the nostalgic episodes, Philip Cobb’s ideally ‘Northern’-sounding trumpet solo was a miraculous contribution and the coda immolated both as a summation and a warning. It’s not often that a loud ending is greeted by stunned silence, cued here by a statuesque Pappano, but that’s what happened initially – testimony to another triumph for Antonio Pappano and the LSO.