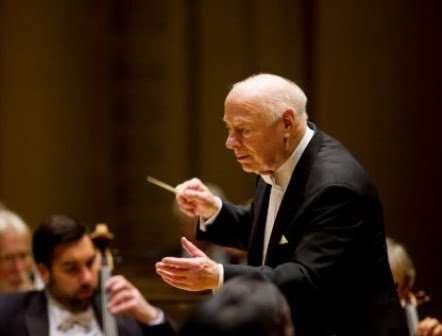 Marking his 85th-birthday this year, Bernard Haitink ranks as one of the finest of living Bruckner interpreters, perhaps even the greatest. That reputation rests not so much upon an immutable approach to the Symphonies, but on one that is susceptible to development and flexibility. Following a monumental and granitic account of the Ninth with the London Symphony Orchestra last year, it would not have been surprising if Haitink had adopted the same manner with the Eighth. In fact there was considerable lyricism and tranquillity, in addition to the moments of characteristically sustained grandeur.

The opening, striding theme in the cellos started heavily and wearily, which might have betokened an agitated and unsettling interpretation. However, by the time of the apparently sinister, “death-watch” coda of the first movement, the music had resolved into something quite consoling. Partly that was on account of the skilful way with which Haitink steered the LSO through those potentially awkward transitional passages where Bruckner tends to repeat a melodic figure obsessively over an unchanging harmonic background. In less masterful performances, such passages become an inconvenient constriction on the score’s wider structure. In Haitink’s hands they were treated as an organic and fluid part of the movements’ course.

Another striking example of this was in the scherzo: after the pounding march-like climax of the main section with thundering tonic and dominant drums, that same alternating figure was modulated to become an almost humorous dance in the immediately following section.

Drawing back into a more relaxed mode at such moments did not come at the expense of overall gravitas. Indeed, at virtually 90 minutes, this was by no means a hurried performance. And yet, least of all did the Adagio sound sluggish – Haitink correctly observing Bruckner’s qualification, doch nicht schleppend. The overall effect was exactly calculated to construct a cogent, dramatic whole, rather than merely revelling in lushness of sound for its own sake. In the opening paragraph, the luminous, seraphic string chords accompanied by harp did not linger, as Haitink saved up an effect of sublimation for a glowing transfiguration of these chords until their reappearance just after the incandescent climax.

The LSO strings were on fine form, providing the backbone to this most epic of 19th-century Symphonies. Sometimes the brass failed to quite hit the mark – the interplay between solo horn and oboe in the exposition of the first movement was not absolutely secure, and sounded a little wooden – but fortunately none of the blazing climaxes were impaired. Furthermore there was a clear purpose and drive in the finale, sustaining momentum through to the very end.

The two sets of violins were placed antiphonally, facilitating clarity. With the double basses exposed at stage right, their underpinning of certain passages received perhaps undue prominence, for instance in creating an almost grinding effect with the pedal points in the throbbing opening of the Adagio. All told, however, there are few conductors or orchestras capable of doing equal justice to Bruckner today, and this LSO/Haitink partnership provided yet another overwhelming experience.