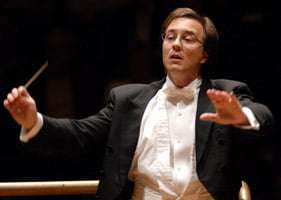 Daniel Harding was to have conducted this concert of “Pure Dvořák”, but his indisposition saw Michal Dworzyński take to the podium. Winner of last year’s Donatella Flick Conducting Competition, he has worked extensively with the London Symphony, and their rapport was obvious from the outset.

Othello (1892) is the least familiar of a triptych of overtures originally entitled ‘Nature, Life and Love’; being preceded by Amid-Nature and Carnival, with all three sharing a common theme (and one that the composer’s son-in-law Josef Suk was also to utilise in his later orchestral works). While not programmatic as such, Othello is more episodic than its predecessors – anticipating the symphonic poems that were Dvořák’s orchestral swansong from the late 1890s – and Dworzyński kept a firm control over its structure, bringing a rapt expression to the introduction and also a wistful anxiety to the chorale at the centre, while not underplaying the tragic intensity elsewhere. If not top-drawer Dvořák, Othello is still an impressive piece and its revival here was more than welcome. 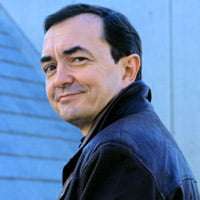 As was that of the Piano Concerto (1876) that followed. A work that cost the composer dear and was long known through an edition of the solo part prepared by Vilem Kurz, it has only latterly found favour, but the advocacy of such as the late Sviatoslav Richter, András Schiff and Pierre-Laurent Aimard suggests its virtues are hardly inconsiderable. Aside from piano-writing that is continually and consciously integrated into the orchestral texture, so eschewing any incitement towards virtuoso ‘display’ as such, the work’s other potential pitfall is that, while not lacking either in rhythmic vitality or melodic appeal, it only occasionally sounds like Dvořák: indeed, it could conceivably have been written a generation earlier – thus making it almost the ‘third concerto’ that Chopin, or the ‘second concerto’ that Schumann, never got round to writing.

Such hypothesis aside, the work is a distinctive product of Dvořák’s early maturity, and Aimard left no doubt as to his identity with it. The first movement can easily sprawl, but its leisurely thematic working was kept on a tight rein – Aimard projecting the piano part with crystalline clarity and Dworzyński (who is unlikely to have conducted the piece before) ensuring an orchestral response at one with the soloist. The slow movement – an ingenious set of variations on the initial motif – was meltingly delivered without neglecting its more capricious tendencies, and if the finale makes rather more of its themes than they can likely yield, it remains an effective rounding-off of the whole piece – not least given the élan with which Aimard steered it through to its lively close.

The original programme was to have featured the second and musically superior set of the Slavonic Dances (maybe next season?), but Dworzyński’s substitution of the Eighth Symphony (1889) was no hardship. He had the measure of the opening movement’s almost intuitive evolution of its themes, evincing a rugged intensity at the climax of the development then an uninhibited verve in the coda. The highlight of the work, the Adagio can be a difficult piece to make cohere, but Dworzyński elided between its often-abrupt expressive contrasts with great skill, while ensuring that its more ominous passages did not undermine the repose out of which the movement emerges and to which it returns.

The Allegretto that follows was treated as a lilting interlude, with its trio delectably inflected and the main theme stealing in on its return to delightful effect. The variations that comprise the finale were no less adeptly handled – Dworzyński building the movement’s climax with unflagging momentum, and drawing a discreet poignancy from the slower sequence that ensues, before the energetic coda wraps up the work to thunderous effect. TheEighth was made an impressive and engaging entity in this performance – the LSO (its credentials in this music established under Kertész and Rowícki) responding in kind. An unanticipated but welcome success, too, for Dworzyński, who clearly deserves his own concert with the orchestra next season.