Following an uncertain opening, the four horns then offering smooth and equable compensation, Sir John Eliot Gardiner conjured a muscular and dynamic Overture to “Der Freischütz”, the sparing use of vibrato adding to its sepulchral appeal, balances well-judged, and with a nicely lyrical clarinet solo from Chris Richards. Come the Overture’s conclusion, for which the loudest fortissimos had been saved, the three trombonists could go home! 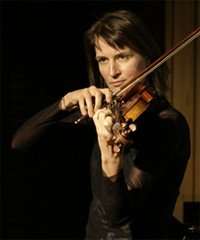 The first movement of Beethoven’s Violin Concerto can be treated spaciously and romantically to great effect, or as something more up-beat. Gardiner took a leisurely view of the lengthy orchestral introduction but invested it with purpose, Viktoria Mullova limbering-up during its course. Her first entry was impeccable, from which the tempo increased to something convincingly directional and in relation to Beethoven’s striding intentions, Mullova pure of tone and feisty of manner without sacrificing beauty of phrase, spoiling the line or forfeiting inwardness. The cadenza, written for Mullova by Ottavio Dantone, continued the mood if bordering on being a little too long and straying somewhat incongruously into Paganini-land; it was though a tour de force for the soloist. If the first movement is given a ‘heavenly length’ pace, then the downside can be a second slow movement. Equally, keeping the first movement on the move and then performing the Larghetto in an unsentimental manner, as here, brings some relentlessness, further compounded when the finale nips along (Mullova introducing some extemporisation) at the expense of joy and wit. That said, Mullova’s focus was always on the music (her virtuosity its servant, although a fuller sound would have been welcome at times) with Gardiner and the LSO lively and vivid accompanists. A little more repose in the central movement and some humour in the finale would have elevated to another level a performance that was already fresh and cobweb-free while seeking the truth that tradition has concealed.

Sir John Eliot had a surprise for us in Mendelssohn’s ‘Italian’ Symphony – orchestral manoeuvres had taken place: the double basses (seven in number rather than the more-usual six or eight) had moved from the left to the right, and the separated first and second violinists had become one group who, along with the violists, were now required to stand. Not the first time in a Gardiner concert that this has occurred, but one still lends a quizzical eye to it; and a shame to lose Mendelssohn’s antiphonal-violin effects, which are just as pertinent as anything in Weber or Beethoven. Hard-driven the outer movements certainly were, yet persuasively so, the tarantula-bitten finale possibly breaking the all-time speed-record (all over in under five minutes), flautists and fiddlers not spared if requiring no latitude. The first movement (exposition repeat observed with of course the plentiful lead-back bars that Mendelssohn troubled to write) was fiery yet graceful with light and shade, trumpets and timpani flourishing (drums once again benefitting from Antoine Bedewi’s superbly airy and vibrant playing), and cellos, with vibrato, blooming in their songful outpouring. With middle movements swiftly despatched but respectively of sacred step and elegant deportment, any possible lack of characterisation was nattily avoided. Whatever the historical precedent of having some musicians stand, the ears received an incident-packed and variegated performance that defied its accelerated outline, a tribute to Sir John Eliot’s enthusiastic carving of the air and the LSO’s resourceful and pin-point response.