Debussy
Pelléas et Mélisande – Lyric opera in thirteen tableaux to a libretto by Maurice Maeterlinck, adapted by the composer [sung in French with English Met Titles] 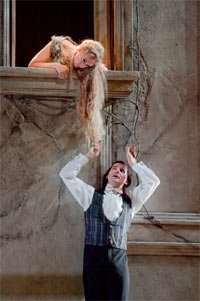 For Sir Simon Rattle’s much anticipated debut engagement, the Metropolitan Opera has revived Jonathan Miller’s 1995 production of Debussy’s “Pelléas et Mélisande”. Sir Simon brought out the inner workings in Debussy’s rapturous score with clarity and transparency, evoking superb performances from the Met Orchestra and the outstanding international cast that includes Stéphane Degout and Magdalena Kožená in the title roles. Also featured are Gerald Finley as Golaud, Sir Willard White as Arkel and Felicity Palmer as Geneviève.

All three members of the love-triangle at the center of the opera’s plot gave strong performances. Kožená’s voice blossomed when she sang out forcefully and retained its delicacy in softer moments. She gave a lovely rendition of the only passage in the opera that even resembles an aria (‘Mes longs cheveux descendent’) as she combed her long hair in the chateau’s tower at the beginning of Act Three. 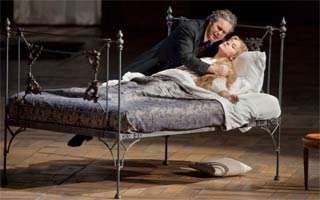 Degout’s bright baritone is well suited to the role of Pelléas, his voice complimenting Kožená’s beautifully during their scenes together. Degout was an attractive Pelléas, playful and restrained at first, but then love-struck and rhapsodic upon overhearing Mélisande’s soliloquy. His characterisation intensified further as Pelléas was drawn into Mélisande’s web of deceit, leading to his death at the hand of his jealous half-brother, Golaud.

Gerald Finley’s performances are always characterised by an intense musical intelligence, and his Golaud is no exception. His vocal prowess and dramatic skill combined to create a vivid portrayal of the obsessively jealous and ultimately murderous husband, unable to desist even as Mélisande lay at death’s door. Finley and Neel Ram Nagarajan, who was superb as Golaud’s young son Yniold, carried off brilliantly the terrifying scene in which Yniold is lifted by his father to Mélisande’s window and made to spy upon her and Pelléas. The chilling impact of this scene was intensified by the inclusion of the sometimes-cut lines in which Golaud presses Yniold to tell him whether the couple are near Mélisande’s bed. 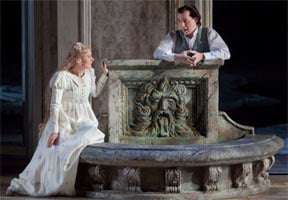 The only member of the cast not making a Met role debut in the current run is Felicity Palmer, who is reprising her 2005 portrayal of Geneviève, the mother of Golaud and Pelléas. Palmer’s fine performance causes regret that Debussy did not give her Geneviève more to do. Willard White was magnificent as King Arkel, the grandfather of Golaud – a role that White has previously played at the Met. Singing in a deep and resonant voice, White gave a touching portrayal of the aged and nearly-blind monarch who exudes a welcome sense of calm and humanity amidst the turmoil that engulfs the royal family. White held the audience spellbound in the opera’s closing scene, in which Arkel comforts the dying Mélisande and declares that it is the turn of her new-born child to live on in her place.

American bass Paul Corona, making his Met debut, sang in rich tones as he projected the physician’s dignified bearing at the bedside of the dying Mélisande, but one cannot help but wonder why the libretto’s stage direction calling for him to approach Mélisande’s bed and touch her body was disregarded. It is a strange physician indeed who would pronounce his patient dead from a distance! American bass-baritone Donovan Singletary was fine in the brief, off-stage song of the shepherd, here portrayed as being dreamt by Yniold. 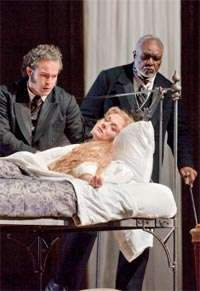 Right from the opening scene, Jonathan Miller’s production proclaims that this will not be a realistic depiction of the Maeterlinck play upon which the opera is based. The forest in which Golaud is supposed to be lost as the opera begins, and the scenes at a fountain in a park and at a grotto, are all depicted at the chateau in which the rest of the action takes place. Interior scenes are somewhat more realistic, as are the two crucial scenes set beneath Mélisande’s window.

John Conklin’s set matches Golaud’s description of the chateau as “very old and very gloomy … very cold and very deep”. The chateau’s towering walls and portals dwarf its occupants, emphasising the relative insignificance of the four generations of royalty depicted in the opera. Set changes were accomplished by means of a large turntable combined with movement of various scenic elements by stagehands, all accompanied by Debussy’s atmospheric orchestral interludes. Although picturesque elements were in motion quite frequently, they moved at a virtual snail’s pace, which added drama to Arkel’s exits as White walked slowly across the stage supported by a cane in each hand. Clare Mitchell’s attractive costumes reflected the early-twentieth-century period of the opera’s composition rather than the indeterminate, but vaguely medieval, period in which the story is set.

The major symbols that pervade Maeterlinck’s play and Debussy’s opera are given appropriately prominent attention in Paula Williams’s direction and other aspects of Miller’s production. Perhaps the most obvious among these is Mélisande’s hair, which attracts Pelléas to her, but also becomes the means by which Golaud cruelly thrashes her. Other symbolic elements include gold objects that are out of reach – Mélisande’s crown (which she forbids Golaud to retrieve from the well in the forest), her ring (which she drops into the fountain), and Yniold’s golden ball (which is lodged under a heavy rock). Interestingly, when Golaud is frustrated by Yniold’s unsatisfactory responses to his questions, he compares himself to a blind man seeking treasure on the bottom of an ocean.

Also among the most important symbols in the drama are those of light and darkness. King Arkel is nearly blind, but “sees” more than any of the other characters. A light is the device used to signal permission for Golaud to return to the chateau with his new wife, and it is when a light appears at Mélisande’s window that Golaud forces Yniold to spy upon her and Pelléas. Pelléas and Mélisande speak of darkness and light in their very first dialogue during which they see beacons at sea guiding a passing ship through the darkness, later when they are at the entrance to a grotto, and again in their final meeting just before Pelléas is slain by Golaud. Duane Schuler’s lighting tended toward overall dimness with brighter illumination at appropriate points in the action, but did not resort to hackneyed devices to reflect the libretto’s every reference to darkness or light.

Under Rattle’s direction, orchestral details came through with remarkable clarity. Instruments in the lower registers gave powerful emphasis to many crucial moments in the drama – for example the rumbling double basses representing the chains that have locked Pelléas and Mélisande out of the chateau, leaving the unarmed Pelléas defenceless against the coming attack from the epée of Golaud, whose entrance is also heralded by the basses. Brighter moments were highlighted by beautifully played solos on violin, flute and oboe, and by harp arpeggios. Sir Simon was cheered lustily at the end of the performance.