These days, one of the few guarantees of a sell-out concert is the inclusion of music by Dmitri Shostakovich. Yet there remains a paradox at the heart of his popularity that still persists: while the great symphonies conceived under the shadow of war and persecution draw crowds even from outside the mainstream classical music audience, many of the later works, which seem even closer to his own preoccupations with humanity and death, barely register in the repertoire. Maybe the political baggage which hangs heavy from the Fifth, Eighth and Tenth Symphonies offers a hopeful model of resistance in the face of adversity rendering them more palatable to modern liberal sensibilities, while the spare language of the later works pushes them uncomfortably close to outright pessimism. 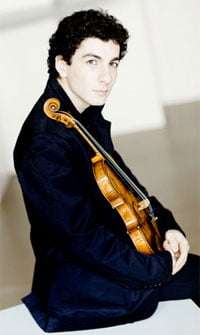 The Second Violin Concerto, accidentally composed a year too early for David Oistrakh’s sixtieth birthday, sits at the crux of Shostakovich’s turn to a bleaker style. This 1967 score followed the Second Cello Concerto of the previous year and each sit in the substantial shadows of their respective progenitors. Violin Concerto No.2 receives a fraction of the number of performances of the First, and many of the young soloists who excel in the First’s demanding solo part fail to proceed to the Second. Sergey Khachatryan is master of both and, in the course of his outstanding performance with the London Symphony Orchestra, hopefully made the Second Concerto a few more friends.

If anything it is more equivocal in meaning than the First, though Khachatryan managed to steer a clear path through it. His reading was at once muscular and thoughtful, pushing the opening Moderato forward (occasionally a little too fast for Valery Gergiev) while ringing it for expression. His tone was moderate in size and his vibrato insistent, and although he didn’t strive for beauty of sound, his playing was never ugly or forced. Vulnerable in the first movement’s cadenza, he was fiery in the last one, and with Gergiev he drove the work’s conclusion at a relentless pace. Finest of all was the central Adagio. Khachatryan caught the mood of tense stillness and was matched by outstanding playing from the LSO, particularly in a raw but beautiful horn solo from David Pyatt. A remarkable performance from Khachatryan was followed by a tender and unhurried reading of the ‘Sarabande’ from Bach’s D minor Partita.

Tchaikovsky’s early First Symphony, composed not long after he abandoned his career in the Russian Civil Service and began pursuing composition seriously, is the music of a composer who, like Shostakovich, found a distinct voice almost immediately. Despite preceding the ballets and remaining symphonies by years and decades, the orchestration of the First Symphony is unmistakable. Tchaikovsky gives us descriptive titles for only the first two movements of this “Winter Daydreams” symphony, but Gergiev carried the pictorial power throughout all four. In some way, the most vividly realised moment was the introduction to the finale. Superb wind ensemble and delicate timpani-playing combined to create rapt stillness and wonderfully pregnant silences.

As with the Shostakovich, this performance was marked by outstanding solo contributions. Finest of all was the long oboe solo in the second movement – ‘Land of Gloom, Land of Mist’ – and the appropriately misty string timbres which preceded it. If not every element of Tchaikovsky’s first adventure as a symphonist entirely convinces – a few awkward modulations and unconvincing contrasts, for example – it is a still a notable first step on one of the great symphonic journeys which, happily, Gergiev and the LSO will be continuing in the coming months and hopefully including the ‘Manfred’ Symphony.