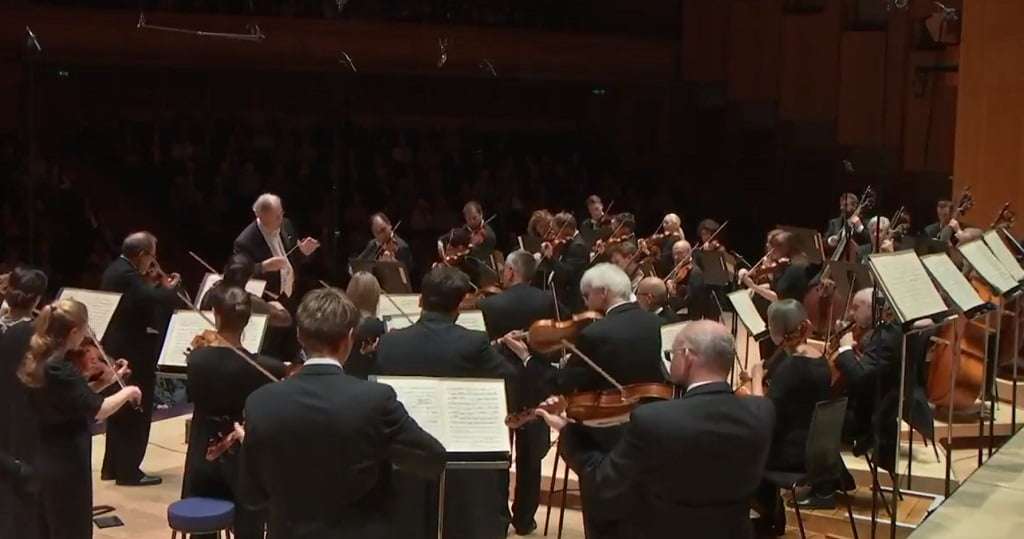 John Eliot Gardiner’s latest squeeze with the LSO is the Symphonies of Robert Schumann, wonders of the repertoire. Sir John Eliot took the ‘Rhenish’ by the scruff of the neck but without manhandling it. Across the five movements tempos were well-judged, although some balances were less so; no matter how magnificent the five modern horns were (one being the ‘bumper’) they collectively somewhat outgunned the period-slanted (rather bloodless-toned) strings (it was twelve firsts, the seconds antiphonal, to five left-positioned double basses) and even the ‘bells-up’ clarinets (very Mahlerian), if not the hard-stick vibrant timpani (Antoine Bedewi top-class), but it was a thrilling sound. JEG found the first-movement’s majesty and direction, and the three pictorial-intermezzos that follow were freshly painted – the second’s grace and point, the third’s wistfulness, and the fourth’s solemn yet uplifting portrait of Cologne Cathedral, trombones only now appearing, with awe and hush entwined. The Finale was sprightly and jaunty, JEG refusing to cherry-pick or over-emphasise, progress never impeded nor particulars glossed over. Very enjoyable and effective.

As centrepiece, Mendelssohn’s Concerto for Violin and Piano, an impressive piece, and not just because the composer was fourteen at the time; the original scoring was for strings and then Mendelssohn added winds and timpani. Invariably when this gem surfaces – rare – it’s the strings-only score that gets the nod. It’s an endearing piece, an ambitious one too, roughly forty minutes, the first movement accounting for half of that length. Full of strong and varied ideas, this is music that exhilarates, charms and is also smile-inducing. It received a sparkling and shapely outing, the soloists’ virtuosity serving the music – Kristian Bezuidenhout playing a handsome-looking and -sounding fortepiano and Isabelle Faust allowing herself some vibrato, especially in the heartfelt slow movement, in the manner of a song-without-words.

The concert started with the Overture to Weber’s Euryanthe, Gardner setting his stall out, and holding good for the Schumann: exuberant music-making, vivid detailing, any member of the LSO who could stand and deliver doing so (all sitting for the Mendelssohn, though, for which Sir John Eliot did without a podium), displaying affection for lyrical music, and – as befits this opera – eerie and dramatic by turns. As an extra, following the ‘Rhenish’, a fizzing rendition of the ‘Scherzo’ from Mendelssohn’s music for A Midsummer Night’s Dream; arguably too fast, the notes shoe-horned into place, if played brilliantly, especially by flautist Gareth Davies, earning a conductor-served thank-you tipple, downed in one! Cheers maestro. No plaudits though to those few in the audience who brought their coughs with them and who intruded with their hacking throughout.