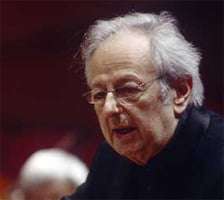 If André Previn (who turns 80 on 6 April next year) now has a little difficulty negotiating stairs and requires to sit while conducting, his musicianship (and his lucid conducting style) remains undimmed.

Haydn’s final symphony (if far from his last music) was given a moderately paced and crisply played account with a relatively reduced string section, which allowed wind and brass details – and hard-edged timpani (Simon Carrington making a return to the LSO) – to emerge on an equal footing. Size of orchestra aside, this was a reading otherwise resilient to ‘period’ touches (on quite a few occasions Previn made it clear that plenty of vibrato was needed), one that proceeded in stately fashion (quite imposing in the slow introduction) but without negating dance rhythms. There was much affection, too, and the finale was a true summing-up of both this work and Haydn’s ‘farewell to the symphony’. With all repeats observed this was a substantial beginning to a concert of generous length. 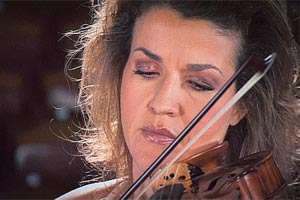 Previn remained on the platform while the LSO reduced still further to even fewer strings (now founded on one double bass) together with pairs of flutes, oboes and horns. Anne-Sophie Mutter’s account of Mozart’s G major Violin Concerto was too fluctuating to be either Classical or Romantic, the solo part somewhat manhandled at times, and with some outsize cadenzas (non-attributed) that seemed an indulgence. If the slow movement was too self-consciously beautiful and over-vibrated, the finale (launched into a barrage of coughing!) found a vigour and sentience that was affecting. Throughout Previn and the LSO were faithful partners.

On his own admission, André Previn currently has eight commissions to fulfil – “I like composing very much … as long as I have pencil and paper”. At this concert the European premiere of his concerto for violin and double bass (2004) was a great success. At 28 minutes it is a substantial piece. Nominally in three movements, the slow middle one is prefaced by something of a ‘jam session’ for the two soloists, jazzy pizzicatos for the bassist, scurrying figures for the violinist. The outer movements are respectively lyrical (with a few Korngoldian moments and lovingly orchestrated) if purposeful, and festive, the finale seeming initially to nod to Hindemith, its closing measures to Walton. The heart of the work is the slow movement, its introspection and yearning momentarily reminding of similar moods in Leonard Bernstein’s Age of Anxiety (Symphony No.2).

The performance, with the two original soloists, was an obviously excellent one, the violin part tailor-made for Mutter and with Roman Patkoló (his instrument discretely amplified) very much her equal. Previn’s patrician mastery of a large orchestra was always evident; in short this particular ‘double concerto’ (another from Previn for violin and viola is waiting in the wings) is a very enjoyable and likeable addition to the repertoire.

To close the concert (and LSO double bassist Gerald Newson’s 40-year LSO career) was a vivid and rich-sounding performance of the Suite from Richard Strauss’s opera “Der Rosenkavalier” (probably compiled by conductor Artur Rodzinski). If his selection doesn’t always hang together, in a performance as pleasing as this it scarcely matters, for here was a glowing account, with bags of detail, but avoiding sentimentality or schmaltz, the ‘Trio’ all the more moving for the dignity – and finesse – brought to it here. Indeed to round-off this year’s concert-going, this was a real treat, the LSO precise yet flexible, the players’ own pleasure tangible, their individuality and unanimity notable – a fine response to Previn’s sure direction.

The concert (save the Mozart) was recorded by BBC4 Television – so the programme-book advised – yet the in-house cameras remained stationary and there were no microphones visible. Still, here’s hoping these three performances were indeed preserved. Previn returns to the LSO on 25 April 2010 – for more of his and Richard Strauss’s music as well as pieces by Copland and Barber.