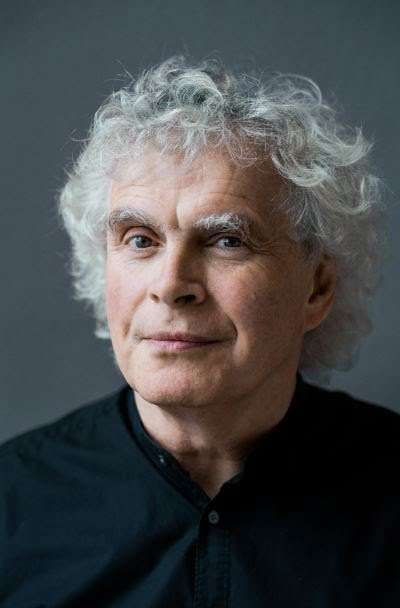 In the run-up to his becoming Music Director of the LSO, Simon Rattle has revisited several works central to his repertoire – this account of Mahler’s Sixth Symphony (1904) marking a new stage in his relationship with a piece going back over four decades.

Now, as before, he found the right ‘energetic, but not too much’ tempo for the opening movement – its trenchant and eloquent themes finding purposeful accord in an exposition whose repeat was duly intensified, with a development whose striving was more marked for the inward rapture of its central interlude. That the reprise lacked a measure of impetus is arguably more Mahler’s fault (his segueing of the themes a little too obvious) than Rattle’s, but there was no lack of heft when the coda was launched on its victorious lap of honour.

Rattle was among the first conductors to opt for the Andante-Scherzo order when this issue (again) arose some thirty years ago. Whatever the arguments for and against in terms of long-term tonal trajectory, it has the advantage to ratchet-up emotional tension over the work’s latter half and this reading was no exception. Taken as an extended slow intermezzo, the Andante lacked nothing in repose on its way to a heartfelt yet never histrionic climax and wistful leave-taking. The Scherzo then pointedly cancelled out what went before, not least when abetted by the hard-edged irony of its Trios. Rattle marginally overdid the Wagnerian portentousness at the Scherzo’s reappearances, though the climactic descent into the abyss was powerfully rendered and the bittersweet poise of its closing bars uncommonly affecting.

That the Scherzo then links hands directly with the Finale is another reason for preferring this sequence. If less incendiary than a memorable performance at the 1995 Proms (with the CBSO), there was little doubting the cohesion of this epic movement as Rattle conceived it – the lengthy introduction searching its way out of uncertainty towards a graphic confrontation between defiance and fatalism, assuaged by musing interludes as mark off the formal divisions then reaching an apotheosis where intended victory is bound to fail. In view of this there was no call for a third hammer-blow, and if the thinned-out orchestration of the revision at this point might have risked feeling anti-climactic, it assuredly set in relief a coda whose gaunt yet muted valediction only made more startling the baleful closing gesture.

Passing failings in ensemble were of little consequence next to the conviction of this reading overall, with Rattle securing much of that incisiveness of attack as characterised an earlier stage of his music-making but which has often seemed at a premium during his Berlin years.

The concert’s first half offered instructive context, with the first performance of Mark-Anthony Turnage’s latest LSO offering. An ‘in memoriam’ for Evan Scofield (son of the jazz guitarist John Scofield), Remembering (2016) is its composer’s nearest approach yet to symphonic form; its half-hour taking in a tensile opening movement, edgy intermezzo and brutal scherzo whose unexpected tailing-off effects a slow finale at once pained yet cathartic. Consummately given by the LSO (sans violins) and Rattle, this is likely Turnage’s best larger work for orchestra in some years.