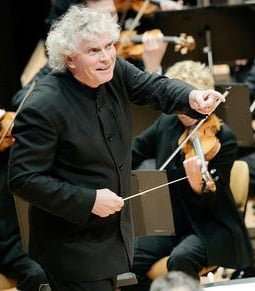 There have been UK performances of Schumann’s 1843 secular oratorio Das Paradies und die Peri at the Edinburgh Festival and with the OAE (under Simon Rattle) in London in the past seven years or so, but it is still a rarity. Rattle is the work’s number-one fan and he has performed it recently with the Berliner Philharmoniker, with the same line-up of soloists as here with the LSO.

Peri was hugely popular both in Germany and oratorio-crazed Britain when it first appeared, but then went out of fashion until Rattle, along with Gardiner, Harnoncourt and Norrington, got wise to its delights. Thomas Moore’s poem was a publishing sensation in 1817 and fed Europe’s romantic craving for the mysterious Orient. The Peri of the title is a fallen Persian angel who has to find the right means of getting back into Paradise. Neither a holy warrior’s last drop of blood nor the final sigh of a maiden who chooses to die with her stricken beloved opens the pearly gates. Only a hardened sinner’s repentant tear at the sight of a child praying turns the key. The marvel is that Schumann’s music (setting a good German translation, co-made by the composer) transcends the poem’s mawkish piety with many passages of great power, and it’s a pleasure to hear how the music fits into the early German romanticism of Mendelssohn, Marschner and Wagner, with a deferential but not overwhelmed nod or two to Bach’s Passions and even anticipating Elgar.

Schumann’s mix of narrative, scene-setting commentary and action is neatly balanced. Mark Padmore brought his magnetic Evangelist zeal to the role of the Narrator, with consistently fine singing and subtly operatic engagement (the work has been staged). Sally Matthews, as the fallen Peri, wielded her muscular soprano with great attack and negotiated the Peri’s trials with gleaming focus; she was at her best in the radiant final part, which has the best music, and achieved the Peri’s longed-for celestial bliss with a magnificent top C.The four other soloists take specific roles in the fairy-tale as well as forming an angelic, moralising quartet. Bernarda Fink endowed the many alto solos with warmth and flexibility, a useful foil to the Peri, and used the lightness of her voice to great effect. Kate Royal sang her big solo in Part 2 with Straussian elegance, and Andrew Staples sighed and yearned beautifully as the warrior and plague-ridden beloved. Florian Boesch’s caressing baritone worked its Lieder magic in his aria to “Syria’s land of roses” and “sainted Lebanon”, setting the seal on the atmosphere of the third part.

A quartet of Guildhall School singers were superb in the Lohengrin-like chorus that opens Part 3, with Elizabeth Skinner delivering one phrase that pierced you like aural stigmata. The classical-sized LSO (with five double basses) was at its elegant best in Schumann’s luminous orchestration, and Rattle’s empathy with the work’s symphonic weight and song-like intimacy transcended its sentimental origin. Towering over all this was the London Symphony Chorus’s magnificent contribution, which combined style, directness, vigour and atmosphere in equal measure. The performance was recorded for LSO Live. As for ‘other matters’, here’s hoping that Sir Simon and the LSO get it together soon.