Mack and Mabel
Music & lyrics by Jerry Herman, book by Michael Stewart, based on an idea by Leonard Spigelglass, revised by Francine Pascal 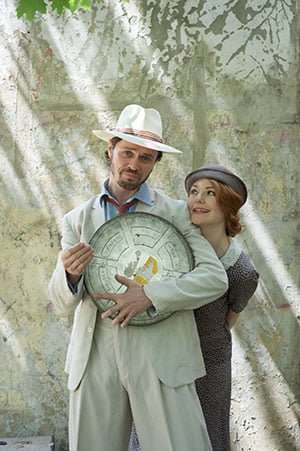 For nearly four decades producers have been trying to stage a definitive production of Jerry Herman’s Mack and Mabel, the story of the working and loving relationship between silent-film director Mack Sennett and his adorable leading lady Mabel Normand. In 1974 the original New York production ran for just sixty-six performances, although it had done well on its pre-Broadway tour. It was nominated for eight Tony Awards but won nothing. Although the show itself was nominated, Herman was not, although he was for the Drama Desk Awards for both Outstanding Music and Outstanding Lyrics, but won neither and neither did the show’s eponymous stars, Robert Preston and Bernadette Peters. It seemed to be a show that no one wanted to remember, perhaps because the book, a sad story of a tyrannical film director and his feisty actress was not a happy one. Mabel, having left Mack, goes on a downward slide into drug addiction and eventually dies of tuberculosis which is not going to send an audience home smiling, despite Sennett’s last song called ‘I promise you a happy ending’ – in fact no such thing, just a fantasy in the director’s head.

It took twenty-one years for Mack and Mabel to reach London where it ran at the Piccadilly Theatre for some 270 performances and featured Howard McGillin and Caroline O’Connor. In between the productions the Overture to Mack became part of ice-skating champions Torvill and Dean’s repertoire. It was then picked up by David Jacobs in his BBC Radio 2 programme and the Broadway cast album became a chart hit in the UK.

Before the London premiere in 1995 there had been a gala charity concert version staged by Barry J. Mishon in 1988 at the Theatre Royal, Drury Lane where he employed all the chorus girls then currently performing in London to be in the ‘Hundreds of girls’ number in which they tapped their way from every entrance in the theatre, packing both the stage and all the aisles. This one-off, sold-out staging was introduced by Jerry Herman and David Jacobs with a starry cast including George Hearn, Denis Quilley, Stubby Kaye, Debbie Shapiro, Paige O’Hara, Frances Ruffelle, Georgia Brown and Tommy Tune, the last leading the ‘Hundreds of girls’ in that fantastic tap number.

Broadway has never seen a revival of Mack and Mabel, although London did in 2006 when John Doyle’s production transferred to the Criterion Theatre from the Watermill in Newbury. It had a cast of eleven players who were also musicians, apart from the leading actors David Soul and Anna-Jane Casey (or Janie Dee when it reached London). Thom Southerland was an assistant director then and in 2008 he staged his own Broadway production – the tiny Broadway studio theatre in Catford, south London. It has long been a favourite show of his and he had a burning ambition to stage it on a bigger scale. After he staged Parade at the Southwark Playhouse last year, Southerland knew he had found the right venue. The book had already been revised by Francine Pascal, sister of the original writer, the late Michael Stewart, and with her permission and also that of Jerry Herman, Southerland has made a very creditable job of again revising the show in order to make Mack and Mabel work.

This is probably the strongest version yet. The setting is Mack Sennett’s Keystone Studios in, firstly, Brooklyn and, subsequently, Hollywood. Lottie Ames, one of Keystone’s actresses tells the story of the meeting in 1911 between Sennett and Mabel Normand as she delivers a sandwich to Lottie. He takes a shine to the girl from the deli who appears to be a natural comedy performer. He takes her on, a rags-to-riches story but Mabel has to contend with Sennett’s ego. They embark on an affair, in spite of herself and despite Mack’s fear of romance.

Eventually tiring of comedy, Mabel fights him to become a dramatic actress, but Sennett’s reputation is built on making his audience laugh. Mabel leaves Mack for another director, William Desmond Taylor, who gives her work as a serious actress. Later, when Mabel returns to Keystone, Mack features her in a dramatic film but still insists on including comedy in the form of the Keystone Kops, so Mabel goes back to Taylor. In trying to forget Mack she becomes hooked on heroin. Meanwhile Sennett finds a way of using the new-fangled talking pictures to his advantage and concentrates his efforts on Lottie, turning her into a singing and dancing star. By then it’s too late to save Mabel from drug addiction coupled with an unfounded charge of murdering her lover Taylor. There is nowhere else to go after this – the end.

It is very difficult to portray Sennett as anything but an anti-hero – ruthless, ambitious and egotistical. Norman Bowman gives a very strong, gut-wrenching performance, always shouting and screaming, never giving an inch. It’s an exhausting performance as Sennett bawls and blusters his way through life. Still he was a great success as the inventor of slapstick comedy in films working with the likes of Chaplin, Fatty Arbuckle, Chester Conklin, Gloria Swanson and even Bing Crosby and W. C. Fields as well as his famous Bathing Beauties and the Kops. His songs in the show explain his philosophy – ‘Movies were movies (when I ran the show)’ and ‘I wanna make the world laugh’ – because his movies were fast and they were funny. He won an Academy Award for the Best Live Action Short in 1932 and was given an Honorary Oscar for his lasting contribution to film comedy. He made over one-thousand silent shorts and many talkies in his 25-year career.

Laura Pitt-Pulford is also extremely good as Mabel, capturing the woman’s strength as an artist and also her vulnerability as a person. She has some of the best numbers in the show (although there is not a duff song in sight) and they include ‘Look what happened to Mabel’, an account of her going from the deli to the silver screen; ‘Wherever he ain’t’, her parting shot for Sennett as she tries to get away from him; and ‘Time heals everything’, in which Mabel tries to blot out the memory of her mentor.

It is a very accomplished company supporting the leading actors. Jessica Martin as Lottie has two great numbers, ‘Big time’ and ‘Tap your troubles away’. This last is a great dance piece by choreographer Lee Proud who also manages to fill the stage for ‘Hundreds of girls’ with just a handful of dancers who simply do wonders. Both numbers are staged and performed with terrific panache. It’s infectious, toe-tapping stuff and, if it weren’t for the downbeat ending, the audience would leave the Playhouse tapping their way along Tooley Street.

Stuart Matthew Price as the young Frank Capra, Peter Kenworthy as William Desmond Taylor and Steven Serlin as Kessell, Sennett’s backer, all make fine contributions to the drama of the plot. Thom Southerland, with successful revivals of Parade, Annie Get Your Gun, The Pajama Game, Oklahoma!, Singin’ in the Rain and Call Me Madam under his belt, as well as the UK premieres of Rodgers & Hammerstein’s Me and Juliet and State Fair, once again gets to the heart of these classic shows and return them to scintillating life. His staging of Mack and Mabel evokes the hectic studio life of early silent-movies well, Jason Denvir’s set and costumes add a degree of pizzazz, while Howard Hudson’s atmospheric lighting casts a tragic shadow over proceedings. With Michael Bradley’s musical direction for a splendidly sonorous eleven-piece band, Mack and Mabel really takes off, putting this problematic show firmly back on the musical map.